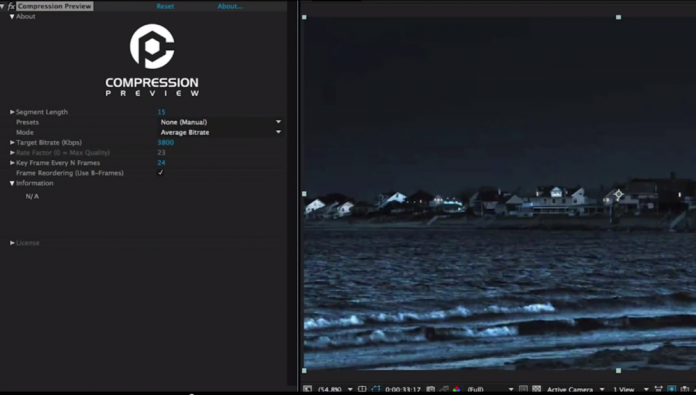 Code Zero Software, a new division of Boston VFX and post studio ZERO VFX, has released Compression Preview, a tool for previewing and repairing the effects of compression within Adobe After Effects. From banding to color shifts and more, Compression Preview can not only simulate compression on footage, but help fix the problem as well.

With online distribution becoming the dominant means of getting video in front of viewers, high quality compression is essential in ensuring good video performance. Of course, compression comes at a price. Anybody who has captured DSLR footage in an AVCHD file and compared it to a RAW version of the same clip has seen the difference. The effects can be brutal and very obvious. Compression artifacts, banding and color shifts abound, and can make good footage look rough.

Fortunately, these are precisely the problems Compression Preview works against. Repairing these issues is only part of the equation, however. The real beauty of the plug-in is the ability to preview the effects of compression in real time and then perform the repair as necessary. For certain tweaks, such as color correction, the plug-in does not perform the repair, but can still provide that real-time preview, so repairing the issue is as simple as making color tweaks and then previewing with Compression Preview.

That’s right. It’ll take pretty footage and show how rough it’ll look once it gets crunched for online distribution. Then, for certain issues, it’ll fix it.

This is a big difference for users who have been using the old After Effects workflow of rendering, evaluating, tweaking and re-rendering. Being able to see the changes in real time based on a preview can potentially save hours of extra work. Even just looking at a preview, making a slight curves adjustment and then seeing the effect immediately is a massive improvement.

“The team at ZERO VFX is in a unique position; we exist at the confluence of creativity and technology and can leverage a very active visual-effects pipeline creating work for feature films, broadcast and web advertising to develop relevant, viable and attractive new software. We’re constantly innovating based on the post-production work we do for our clients, which include major feature films such as ‘The Equalizer’ and literally hundreds of commercial projects each year,” said Brian Drewes, co-founder of ZERO VFX and Code Zero Software. “Compression Preview is a perfect example of technology that was born from a very real pain point that our artists experience everyday, and translates into a valuable solution for the marketplace.”

But don’t believe us. Take a look at Compression Preview below:

The plug-in is available now for $49 from compressionpreview.com

Got any tips or tricks for rendering and compressing? Have you had a chance to put Compression Preview through it’s paces? We’d love to hear from you in the comments or on Twitter @Videomaker