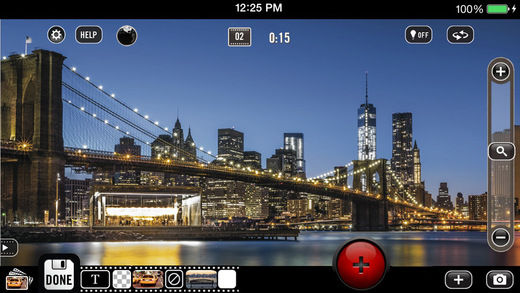 Remember a few weeks ago we wrote about an app called Vizzywig4K which allowed iPhones to shoot, edit and deliver 4K video? Remember it cost $1,000? Heh, heh. Yep. That’s what we thought too. Well, the creators of Vizzywig and Nail Gun Alley have dropped the 4K app out of the pricing stratosphere to just $49.99. Does that make it better?

With an update released last week to add compatibility for iOS 8.1, the folks at i4Software made some sweeping changes to their app, including not only the new price, but also changing the name of the app to Vizzywig 8xHD, referring to 4K having roughly eight times the resolution of 720p video.

Fortunately, i4Software is fully refunding the difference in prices for those who paid the full amount. Very nice of them, but to offer that kind of refund we can’t imagine there were more than a handful of adopters at the original four digit price.

With any resolution-based video application, performance trumps all. While we can't publish the sample comparison clips, they are ready to be seen. For those interested in checking out how the Vizzywig app stacks up with other 4K smartphones, such as the Sony Experia Z2 (similar in almost every way to the current-gen Z3), the LG G3, and even a RED ONE MX, check out i4Software founder Michael Zelatel’s uploaded test videos to judge the quality. Pretty interesting, though we'd be thrilled to see how it stacks up to the OnePlus One or the current smartphone camera heavyweight champ, Microsoft's Lumia 1020. Though not 4K, these smartphones are leading the charge for image quality. If anybody has the OnePlus or Nokia device, hit us up @videomaker on Twitter and let's see some footage! [image:blog_post:54161]

The changes are pretty significant, and the price makes 4K iPhone video production a heck of a lot more reasonable. Is it worth it? Will Cupertino roll out 4K in the next iteration of the iPhone 6 Plus? Apple surprised some of us by not introducing 4K at all in any of their devices at recent launches, so Vizzywig 8xHD is the key to 4K iOS video right now. Tests look good, and those who have sprung for it seem enthusiastic. It is certainly a decent piece of engineering by i4Software. So if 4K video shooting, editing and delivering within iOS are on the menu, head on over to iTunes to purchase the updated app. Let us know in the comments, on Facebook and Twitter if you’ve tried the app, and what you think of the performance, the price and even the new name![image:blog_post:54166]

For all of the latest news, reviews and innovation in the world of video making, keep it locked to Videomaker.com!