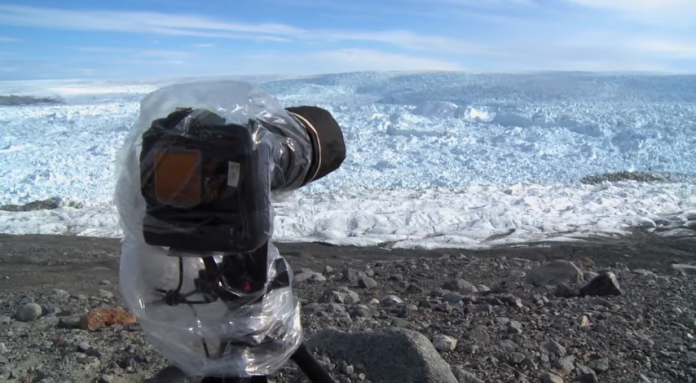 In an effort to document the effects of global warming during the production of the feature documentary, Chasing Ice, the Extreme Ice Survey team put some customized Nikon D200 setups through their paces, and the results are incredible.

The survey is a massive undertaking, with — as of January 2012 — 27 cameras stationed at 18 glaciers. To keep them running, the Nikon D200s are powered by a custom-made combination of solar panels, batteries and other electronics. The sites were chosen for being “photogenic sites that represented regional conditions well, had high scientific value and were photographically and logistically manageable.”

Each of the camera systems weigh 125-150 pounds or more and must be secured with anchors and guy wires to withstand winds up to 150 mph, and survive temperatures as low as -40°F, blizzards, landslides, torrential rain and avalanches.

The D200s have shot once every daylight hour, for approximately 8,000 images per camera per year. The total survey now has archives including more than 800,000 images. The idea is this: “By capturing images in diverse locations throughout the Northern Hemisphere over several years, the EIS can provide a more complete picture of the effect of global warming across different geographic regions than previous ground-based, time-lapse studies.”?
Beyond the obvious point of Nikon sponsoring the survey, the D200 was chosen for having time-lapse and GPS capabilities, as well as for it’s robust design and build quality.

The result of the survey, among other things, was the well-received Chasing Ice documentary. If the name sounds familiar, it received a Best Original Song Academy Award nomination for “Before My Time”, which was performed at the Oscars by Scarlett Johansson and Joshua Bell.

Beyond Oscar nods and critical acclaim, the documentary yielded some incredible footage including a 75-minute calving of ice, the longest ever captured on film. After waiting for weeks overlooking a massive glacier to hopefully capture the event, the filmmakers were finally witness to 7.4 cubic kilometers crashing off the glacier.

Here is the unbelievable footage – note that there is a bit of NSFW (not safe for work) language in the clip: