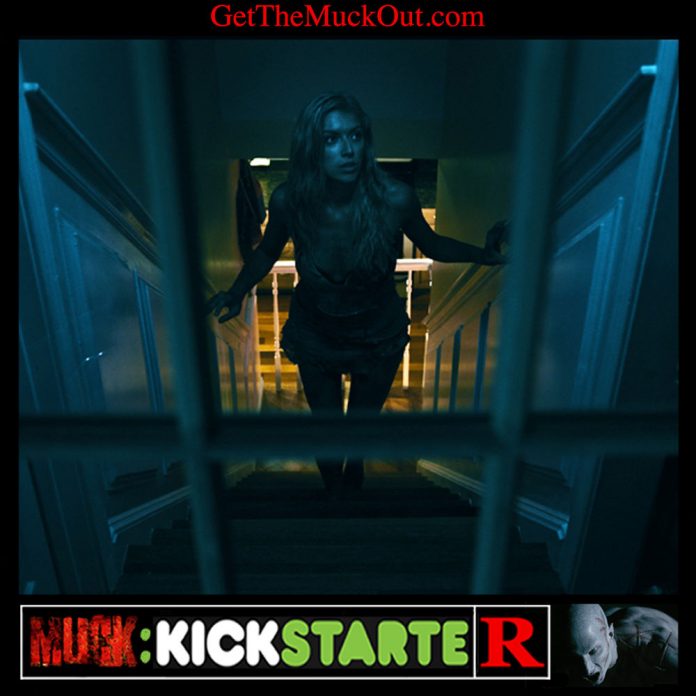 MUCK draws horror fans into a world of old-school practical effects and extremely dangerous stunts in a way that they’ve never experienced before – in “Bloody Stunning” 4K Ultra HD. “With MUCK, we had to bring these practical effects into the light, because when you’re shooting on Red Epics in 4K you can’t hide the effects in the dark,” says writer/director Steve Wolsh. “An Epic captures everything, so the premium on planning, preparation, and execution is greater than ever.”

Of the many stunts in MUCK, this is illustrated best through a dangerous stunt in which a naked girl was exploded through a front porch picture window. And in slow motion.

It began with a 15-foot sprint through a pitch-black living room, followed by her hitting a mini-trampoline that propelled her up to clear four feet of porch as she passed through blood-stained curtains framing a 4 x 6’ picture (sugar glass) window: 24 sq. ft. of glass shattering around her. Then a POP-SWOOSH as two air cannons expelled shards of glass and wood particles in her wake as she lands on a 4 x 4 crash pad buried under the grass in the front yard; hitting the grass over the crash pads resulted in a double bounce and slide. And all of this done while completely nude.

The once-only shot was captured from dual angles; one Epic was set at a dutch angle on the edge of the porch while another covered the entire front of the house. “I firmly believe we should do every effect as real as humanly possible,” says Wolsh. “That’s just how I’m wired. I have no desire to direct computers, and I’ll never understand how two actors in front of a green screen hitting each other with green sticks can ever be as compelling as two guys in a swamp with axes.” And thanks to 4K, the audience could see every single shard of glass cutting through the air, in crystal clear, slow-motion Ultra HD.

MUCK will be in theaters Friday the 13th, March 2015. Those intrigued by the idea of more 4K Ultra HD horror with no CGI can visit the Kickstarter page for the Muck prequel: http://bit.ly/MuckKickstarter