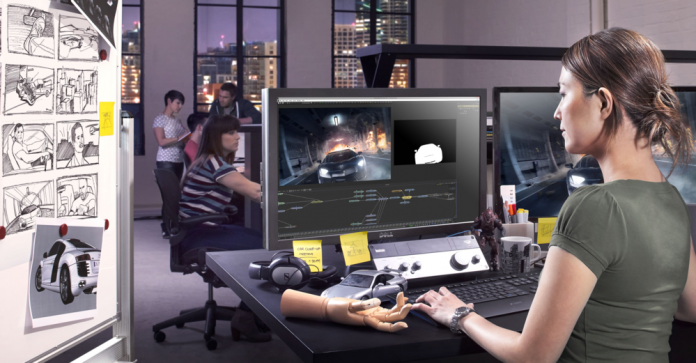 Only a couple of months after announcing the purchase of eyeon, creators of Fusion visual effects and motion graphics software, Blackmagic Design has rolled out Fusion 7 and Fusion 7 Studio. Best of all, Fusion 7 for Windows is free of charge and ready for download now. Fusion 7 Studio is priced at $995.

The free version of Fusion 7 features a large visual effect and motion graphic toolset, perfect for personal or commercial work. It features an infinite 3D workspace and an easy to use node based workflow, for building combined effects, a la Smoke.

The toolset includes advanced 3D compositing, paint, rotoscope, retiming, stabilization, titling, a 3D particle generator and multiple keyers. One of those keyers just happens to be Primatte. Not bad for free software.

Fusion 7 also allows for the import and render of 3D geometry and scenes from other applications, or 3D elements created from scratch.

If this doesn’t quite cut it, Fusion 7 Studio was also announced. Fusion 7 Studio is Blackmagic Design’s complete VFX and mograph solution, with collaborative tools and unlimited network rendering for creative teams and larger facilities.

Additionally, Fusion 7 Studio includes all of the features of the free Fusion 7 package, but adds features such as optical flow tools for advanced retiming, stabilization and stereoscopic 3D production, support for third party OpenFX plug-ins, and distributed network rendering so customers can render jobs on an unlimited number of computers at no additional cost.

For professional studio workflows, Fusion 7 Studio includes Generation, a studio-wide, multi-user workflow and collaboration tool that helps creative teams manage, track and review versions of every shot in a production. Also helpful is the ability to move projects created in the free Fusion 7 software over to a Fusion 7 Studio workstation to take advantage of the workflow collaboration and unlimited distributed network rendering features of the full application.[image:blog_post:54526]

Free VFX software. A high end pro version for a grand. Wondering what the catch is?

No catch. In fact, Fusion 7 Studio doesn’t require annual maintenance fees, subscriptions, a connection to the cloud, or per node render license costs.

Haven’t heard of Fusion? While not as well-known in the mainstream as After Effects or Cinema 4D, Fusion has been one of Hollywood’s mainstay visual effects and motion graphic tools for over 25 years and has been featured on film projects such as Maleficent, Edge of Tomorrow, Sin City: A Dame to Kill For, The Amazing Spider-man 2 and The Hunger Games, as well as television shows like Battlestar Galactica, Orphan Black and others.

Make no mistake about it, a full-functioned professional visual effects application such as Fusion 7 for free, and Fusion 7 Studio being priced at under a thousand dollars is a potential game changer, particularly when the rest of the Blackmagic Design lineup is considered. Resolve is world class and improving constantly, the production hardware is improving and features new firmware updates regularly, and their camera lineup is getting larger and more cost effective with each passing year.

Have you tried Fusion 7 or Fusion 7 Studio? We want to hear what you think! Tell us what you like or don't like about the software in the comments section or write to us on Twitter @videomaker