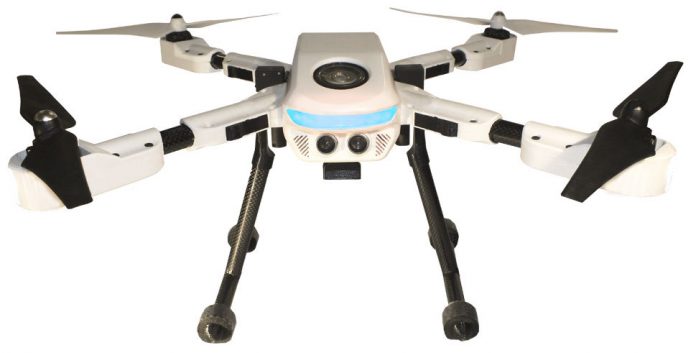 Robotics startup, DreamQii, has reached initial goals for the Indiegogo-funded PlexiDrone, their innovative aerial camera system. The success of their campaign ensures that the modular flyer will land in the living rooms of first-round backers early in 2015. PlexiDrone differentiates itself from existing drone players by taking the ultra-popular drone craze and making it ultra-portable.

To pull this off, PlexiDrone breaks down into small components and packs away handily in a custom hard shell backpack dubbed the PlexiPack. The PlexiPack keeps the components of a PlexiDrone safe and separated from one another, opening like a magazine to reveal everything at a glance. The pragmatic layout reportedly allows PlexiDrone users to assemble their drone in less than a minute. [image:blog_post:52816]

The modular approach to construction of PlexiDrone has additional benefits as well. The drone’s arms, or PlexiArms as they’re called, can be swapped out in the event of a mishap or to extend flight time beyond traditional limits brought on by overheating. It’s feasible that users looking to shoot all day could have multiple sets of PlexiArms and smart battery packs, meaning that shooting only has to stop long enough to swap out arms and batteries before rolling again. Chances are, however, that this shouldn't cause an issue: most mounted cameras will require batteries and memory card changes in similar cadence to PlexiDrone’s need to rest. http://youtu.be/L9OwUOtU380

Portable doesn’t mean that PlexiDrone doesn’t pack a punch, however. This camera copter is capable of carrying roughly a kilogram of payload, so be prepared to send GoPros, Sony Action Cams, and a growing list of other mountable cameras up into the sky. While nothing is yet set in stone, the term “Blackmagic Pocket Cinema Camera” has been tossed around the DreamQii office a time or two, and they’re currently checking out potential mounts for lightweight Sony superstars, the Alpha 5000 and 5100. [image:blog_post:52811]

The hits keep on coming with PlexiDrone, offering a GPS-based “follow me” feature, for those of us looking to take selfie production value through the roof. The follow functionality is as simple as locking onto the GPS signal of an iOS or Android smartphone. PlexiDrone can also be used in conjunction with other PlexiDrones for Multi-Vantage filming. That’s right – PlexiDrones can, and will, swarm things. Don't worry though – the swarming is all controlled through a single mobile device interface.

Control from the ground has also been thoroughly thought through (holy alliteration, Batman) with the innovative PlexiHub. The PlexiHub allows for long-range PlexiDroning by bridging the signal of a controller's mobile device with a long-range radio signal good for a line-of-site friendly 1km, though the actual range is much longer, future-proofing PlexiDrone for the day when non-line-of-sight flying is permitted. Control doesn't have to be through a mobile device, however. Those in favor of a more traditional control system can attach their own 6 channel receiver in order to use their own RC controller. [image:blog_post:52821]

All of this is well and good, but none of it would mean a thing if the footage captured wasn’t good. Well, they’ve thought of that and have made the landing gear of PlexiDrone retractable to allow for 360-degrees of unobstructed viewing. No more cropping legs out of images or clips.

Additional features include obstacle avoidance with 6.5 meters of forward sight, audible feedback in the way of an actual voice (e.g. “I’m ready to fly now”, or “You should really practice flying me more”), and a developer-friendly serial and power port to allow for custom payload and data transmission.

PlexiDrone will be available in Q2 of 2015, and can be pre-ordered through Indiegogo on the PlexiDrone website.

Sound mixing for video editors — how to mix like a...

In days of yore, when SD was the only D, you needed to make a project, mixing your audio into a single stereo track...