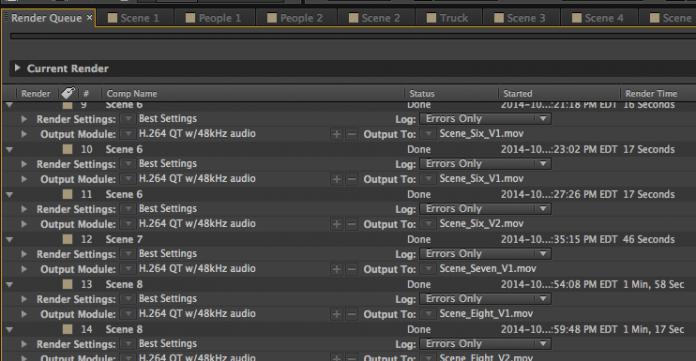 Render settings vary from project to project, client to client, and enthusiast to professional in some cases. So, if a video’s final destination is YouTube, as it is for many, what are the recommended best settings when rendering a video?

This may seem like a bit of a trick question, as many editing and transcoding packages have optimized “YouTube” output presets already created, but let’s imagine we want to manually tweak our settings to make YouTube ultimately happy.

First of all, make sure you’re working with a file type that YouTube gets along with. There are a bunch: MOV, MPEG4, MP4, AVI, WMV, MPEGPS, FLV, 3GPP or WebM. Of that list, YouTube prefers videos are contained in .mp4 files with no edit lists (your audio and video may go out of sync), and moov atom at the front of the file (the file is optimized for fast web start).

YouTube’s video codec of choice is H.264, for it’s high quality and low file size. Render files as progressive scan versus interlaced, high profile, 2 consecutive B frames, closed GOP (GOP of half the frame rate), CABAC, with variable bitrate, and chroma subsampling of 4:2:0. Some of these terms may seem a bit foreign, but YouTube presets will set most or all of them for you. For better descriptions of any term, mention it in the comments and we’ll define it.

YouTube doesn’t much care what frame rate videos are posted with, but it is recommended that video shot at 24, 30 or 60 frames per second be rendered and uploaded at the same frame rate. YouTube wisely recommends de-interlacing interlaced footage prior to uploading.

Well, those are the basics. Again, ask for any term definition in the comments section. We’ll cover bitrates for YouTube in an upcoming post. Keep it locked on Videomaker.com for tips, tricks and product information!