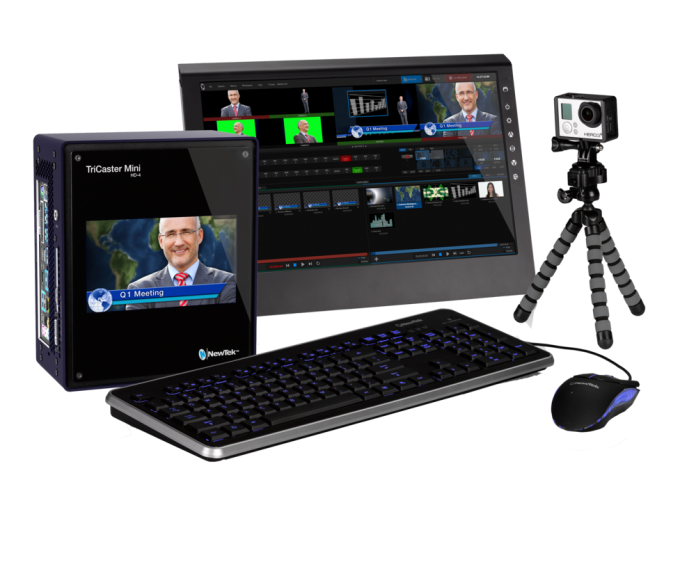 The lobby of my apartment building is more suitable to standing around reading the mail than it is for working as a 4-camera capable, multimedia video studio outputting network-style content. But that’s what is about to happen, courtesy of NewTek’s Tricaster Mini.

I watched as Philip Nelson came in through the door carrying a nondescript knapsack — which he told me had no issues going through the metal detector at the airport or flying on the plane with him. He pulled out the under-10 lb. TriCaster Mini and set it on the lobby’s coffee table. What I saw immediately, besides the fact that it had a side-mounted LCD screen (which can be used as a small display or to show dedicated graphics like a countdown clock) and a plethora of inputs, including Ethernet, was that the main inputs for the cameras were HDMI — yes the same HDMI commonly found on flat panel TVs. In my head I got the idea that the TriCaster Mini had been designed for the person or company who was looking for a professional broadcast-quality device but wasn’t interested in the “techie” world of involved and difficult setups or a long learning curve. [image:blog_post:52721]

These musings of mine were borne out as another member of the NewTek team began to set up a “virtual set” so as to demonstrate what the TriCaster Mini could do. Time involved: less than 6 minutes from plugging in the Tricaster Mini to setting up a green screen on stands, complete with LCD lighting and a consumer-grade HD video camera. Also brought into play were a 16:9 monitor and a wireless keyboard and mouse. The Mini includes a wired keyboard and mouse but can use wireless provided that a USB receiving dongle is part of the equation.

The other NewTek representative stood in front of the green screen, and a few adjustments later we found him now seated behind a “news desk.” This was done quickly but, more importantly, it looked good. As in professional quality good, with a double screen inserted just like CNN might do. [image:blog_post:52716]

From the adjustments being made, I could see that much of the software operating the TriCaster Mini is designed for the non-tech oriented: of course using the graphics generator, the special effects or the streaming capabilities requires some investigation into procedures, but nothing like what it used to involve — especially if you’re adding in your own elements for transitions or animations. A corporate video using the TriCaster Mini could justify its $7995.00 price in one or two projects. Choosing the less expensive model sacrifices the side-mounted display and reducing the 45 hours of internal HD recording to 15 hours, but saves about $2000.

You can bet some rich kid’s YouTube video would stand out once he got his hands on this. And did my tongue ever flop out when Philip demonstrated the panoramic effect by zooming down from the virtual Eiffel tower to the ground where our “newscaster” in the virtual set was now standing.

To me, what stood out most from the short time spent was how simple it all was to use — fulfilling the dream of NewTek’s grandpappy, the Video Toaster, for professional abilities coupled with ease of use and portability. The TriCaster Mini really is that good. And yeah, I want one.