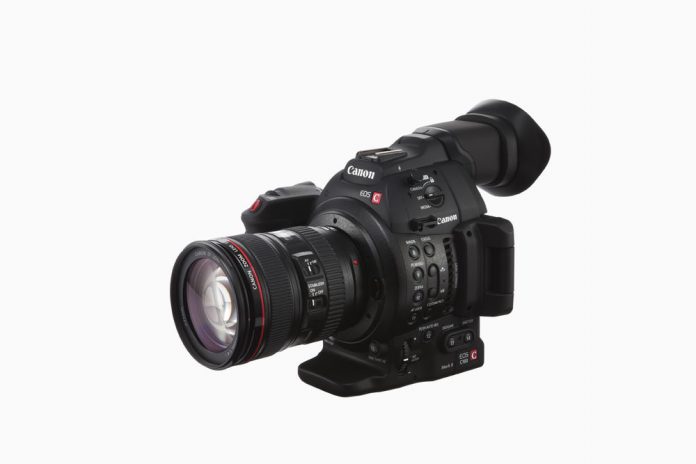 At 2.5 pounds, the light and portable C100 Mark II was designed with economical film and video productions in mind. The Mark II builds on the success of the original C100, which delivered shallow depth of field and high sensitivity in low-light environments. The C100 Mark II is compatible with over 103 Canon EF Series lenses, including STM models which can deliver smooth and silent autofocus during filmmaking.

“Canon’s commitment to the advancement of tools for visual expression takes another major step forward with the introduction of the EOS C100 Mark II Digital Video Camera,” said Yuichi Ishizuka, president and COO of Canon U.S.A., Inc. “Drawing on input from Canon’s global community of Cinema EOS camera users and from digital filmmakers using Canon EF lenses – 100 million of which have now been produced worldwide[i] – the Company has added new capabilities to the EOS C100 Mark II from its predecessor that powerfully leverage our considerable expertise in optics, imaging, and digital signal processing. The result is an improved, affordable Super 35mm CMOS digital camera that is designed to provide outstanding HD image quality, operational performance, ergonomics, and workflow convenience.”[image:blog_post:53511]

The design of the C100 Mark II has been enhanced from the previous model, with the inclusion of a large-size detachable eyecup for the camera’s large 68-degree tilting 0.45-inch 1.23 megapixel color EVF (electronic viewfinder). Red trigger buttons are on the camera body, top handle, and grip, and there is a built-in mono microphone on the camera body ? for times when the top handle is not attached ? which can be used to capture basic sound for audio notation or to assist in audio syncing during post.

A big change with the EOS C100Mark II is the new display panel. It is a fully-hinged 3.5-inch 1.23 megapixel OLED display, which delivers 100 percent of the field-of-view, wide color range support, and better viewing in bright environments. The new hinge ? which folds the panel shut when stowed, protecting the OLED surface ? opens 180 degrees to reveal function keys and a joystick, and can open even further to 270 degrees to deploy against the side of the camera to provide monitoring for directors or other production personnel. Other improvements include 17 assignable recessed function buttons, dual SD card slots with a transparent cover, and a simplified battery insertion and removal release.

The insides got a makeover as well, with Dual Pixel CMOS AF now coming as a standard feature, which provides smooth and consistent autofocusing. Additionally, the EOS C100 Mark II includes Face-Detection AF, which is a first in the Cinema EOS camera line. The face-detection AF utilizes contrast detection AF to maintain focus across most of the image plane, which can be an advantage in one-person electronic news gathering (ENG) situations.

Images quality won’t be a concern, as the C100 Mark II uses the Canon DIGIC DV4 image processor, which separates the RGB output from the Mark II’s 8.3 megapixel CMOS image sensor into three 8 megapixel signals (as opposed to 2MP in the previous-gen EOS C100) for noticeably improved image quality. The Canon DIGIC DV4 processor also includes a new debayering algorithm to help minimize moiré and reduce video noise even at high ISO speeds. (high-sensitivity recording on the camera ranges from ISO 320 to 80,000).[image:blog_post:53521]

The DIGIC DV4 allows full HD recording in both AVCHD or MP4 formats in a variety of bit rates, up to 28 Mbps and 35 Mbps, respectively, and with frame rates up to 59.94p. Video shot on the C100 Mark II is captured to the dual SD card slots, but this camera has a few tricks up its sleeve. The camera can capture in one format, or to both formats simultaneously. Longer clips can record continuously by jumping from one card to the second card without a break, and an included Data Import Utility can rejoin divided files if the shooter doesn’t already have a solution.

As with the rest of Canon’s Cinema EOS line, the EOS C100 Mark II includes Canon Log as a recording choice, which provides maximum dynamic range for color grading. The Mark II, however, has added a built-in LUT (look-up table), which enables users to view the camera’s live video signal in Wide DR (dynamic range) or the BT.709 (TV standard) color space on the OLED or any external monitor connected to the camera’s locking HDMI® output (this feature can be turned off in the menu). Uncompressed video output (with time code data and 2:3 pull-down markers superimposed) can also be output via HDMI to an external recorder.

A cool new feature of the C100 Mark II is the addition of wireless file-transfer capabilities, which use dual 5 GHz and 2.4 GHz frequencies. In addition to wireless transferring, the C100 Mark II can be controlled remotely by laptop, smartphone, tablet, or Canon’s RC-V100 Remote Controller we reported on a few weeks ago.

The Canon EOS C100 Mark II Digital Video Camera is scheduled to be available at the end of December, so we’ve got a couple of months to save up the $5,499 estimated retail price.