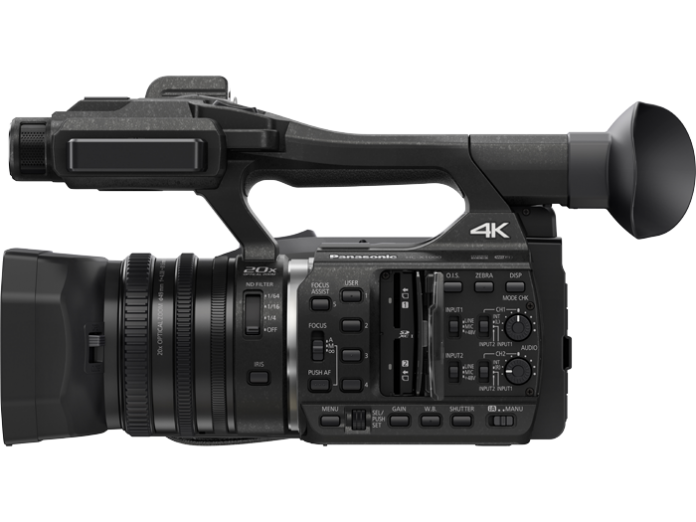 When talking about pro features, the hot topic these days is resolution, and the HC-X1000 doesn’t disappoint. Capable of 4K, UHD, or 1080p in a number of frame rates and codecs, the HC-X1000 is already bouncing off the glass ceiling of sub-$4000 camcorders.

Now, frame size doesn’t necessarily mean resolution or image quality, so it should be mentioned that the camera puts a 4K 8-MP 1/2.3-inch BSI sensor to work by ALWAYS shooting in 4K.

That’s right. This consumer camera is always shooting in 4K, regardless of the captured footage.

No line skipping. No cropping.

What this means, is that when shooting in 1080p the camera is capturing 4K and scaling down the video internally. The HD image is created from true 4K, meaning ultimate sharpness in the 1080p shots while maintaining the same perspective as a 4K image.

Again, that’s right. A consumer camera shooting in UHD at 60fps. Bitrates? Try 4K at 150Mbps and 2K at 200Mbps. The sensor has other tricks too, like kicking butt at night, with a 0 lux night mode.

The HC-X1000 captures this footage to two SDXC card slots, and uses either simultaneous recording to both cards for an instant backup, or a relay recording system such as the one found on Sony prosumer cameras, where recording automatically rolls over from a full card to the non-full card. The operator can swap out a full card before the recording rolls over again, therefore allowing pretty much unlimited recording time. Panasonic also upped the ante with a cool feature they call “Background Recording”, which allows the operator to record continuously on one card, while starting and stopping recording on the other card. This allows for capturing selects while keeping a record of an entire event, just in case something too good to miss comes up when not rolling on the select slot.[image:blog_post:51216]

Toss in smartphone control through wi-fi or NFC, and a unique illuminating LED ring to show standby and recording modes, this thing is slammed full of features professionals come to expect and will give consumers a camera future proof enough to get started in 4K without breaking the bank.