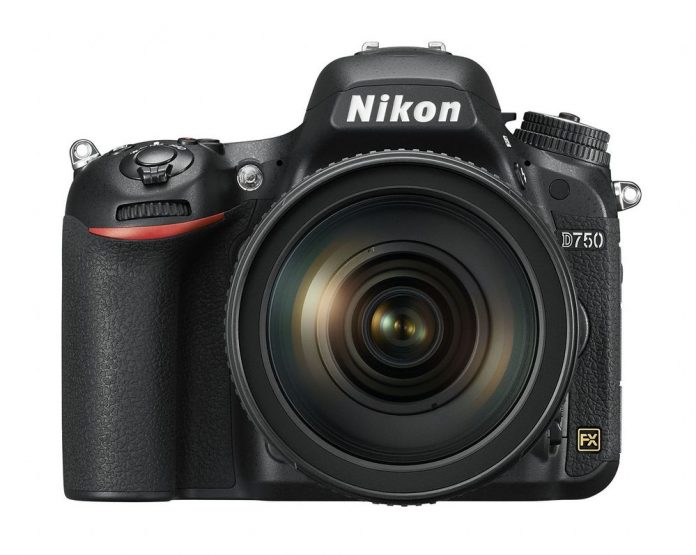 The feature list is impressive, including a 24.3-MP FX-format CMOS sensor as well as the same 51-point autofocus system found on Nikon’s top level cameras. Storage is handy, via dual SD card slots.

The Advanced Multi-Cam 3500-FX II AF focus system is built for serious shooters, with a high-speed burst rate of 6.5 frames per second (fps), at full resolution. Like it’s larger brethren, the Nikon D4S, the D750 features the 91,000-pixel 3D Color Matrix Meter III, a fast autofocus system using 15 cross-type AF sensors to increase accuracy, with 11 cross-type sensors that are fully functional up to f/8. As well as the normal, wide area, face priority and subject tracking AF modes, the D750 also features the new Group Area AF mode for better accuracy when shooting multiple targets. Low light focusing is a cinch for the D750, as the AF system has been beefed up with the ability to lock on to subjects in as little as -3 EV illumination, which is a first for any Nikon DSLR.

The image quality is handled by Nikon’s EXPEED 4 Image Processing Engine, similar that found in the the pro-level D810 and D4S. In addition to better performance and energy efficiency, the EXPEED 4 contributes to the image quality with better overall noise reduction performance. That noise reduction is evident in challenging light conditions, with the D750’s broad ISO range extending from 100-12,800, expandable from (Lo-1) 50 to (Hi-2) 51,200.[image:blog_post:51441]

The D750 is also highly capable in the video department, matching the advanced video functionality of the Nikon D810. The D750 can capture in 1080 at 60/30/24p, and includes full manual controls for every setting, right down to aperture adjustment. Like the larger D810, the Power Aperture feature provides smooth transitions while adjusting the aperture during video recording, and in the D750’s manual mode, shooters can control shutter speed and ISO. After pressing Nikon on the features, we've concluded that there may be no reason to buy the Nikon D810 over the D750 if your only interest is video.

In addition to the new FX-format camera announcement, Nikon announced the AF-S NIKKOR 20mm f/1.8G ED, a fast ultra wide-angle FX-format lens. Nikon’s first ultra-wide angle lens with an f/1.8 aperture, the fast prime will allow for excellent control over depth of field at a reasonable price. On FX-format cameras, the lens is capable of a 94-degree field of view, making it ideal for real estate, landscape and other wide-angle-friendly shooting environments.[image:blog_post:51451]

This super-wide prime is also ideal for video production, particularly in tight quarters, thanks to that wide field of view. It features a whisper quiet AF-S autofocus motor and features Nikon’s exclusive Nano Crystal Coat to reduce instances of ghost and flare.

To round out the announcement, Nikon also threw a flash into the mix, with their new SB-500. The SB-500 speed light is a versatile addition to a DSLR shooting setup, offering both the benefits of a quality flash, as well as continuous 100 lux LED lighting for video applications. The head of the Speedlight has a 90-degree vertical swivel for bouncing light off ceilings, and rotates 180-degrees for softer lighting effects. For remote lighting possibilities, the SB-500 Speedlight can be integrated into a CLS system with two-group/two-channel control.[image:blog_post:51456]