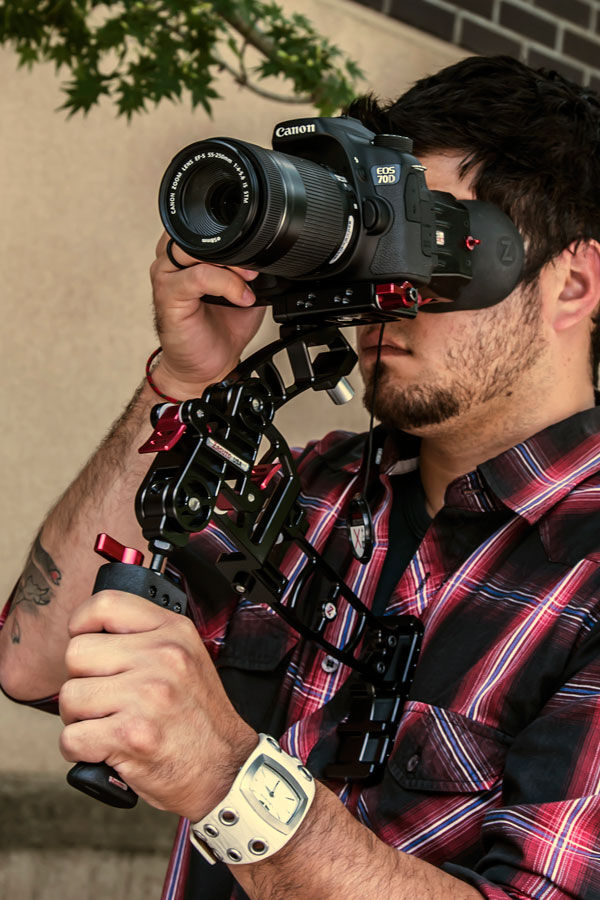 We want you to shoot lots of video. We would also love to give you all a DSLR that you can run out and shoot with, but only one of you will win one from us. Enter our contest for a chance to win the ultimate run-and-gun kit.

The Canon EOS 70D with EF-S 55-250mm f/4-5.6 IS STM is a great camera on it’s own, with cutting edge autofocus capability, a touch screen and versatile zoom lens. We’re also adding in two Zacuto products that will make run-and-gun shooting easier and fun. The Zacuto Marauder and Z-Finder Pro give your camera a viewfinder and rifle-style stabilization and support. Your camera control will increase with the high quality design of Zacuto’s gear. The Marauder folds up to about the size of a hard cover novel, with adjustments for the grip and shoulder pad. Each piece of our DSLR Kit can serve you well, whether it be the 70D providing a second angle, or the Marauder with it’s 2lb. body, can carry cameras as big as the Canon EOS C100. You can certainly go without the Z-Finder, but either way, control is the name of the game.

[image:blog_post:50501]Trying a new DSLR can be daunting, so unless you’re an EOS 70D user, you might be completely new to touch screens on DSLRs. The touch interface makes it very easy to jump in and control the camera. The sooner you try new cameras, the more you’ll know what you’ll want to customize in a camera, which will speed up your production.

Whenever you add points of contact supporting your camera, stability can increase. The Marauder puts your core body to work and can free up one hand. This makes panning and tilting while pivoting from your center, very smooth, and the positioning makes it nice to keep your eye in the right position to check the viewfinder or monitor. As with any handheld camera support, your footwork will require some skill, but with practice comes confidence, and the ease of the Marauder’s setup can definitely foster more practice.

For the contest, you’re able to get up to 10 additional entries by referring friends, so increase your chances and talk with your peers about the chance to win. We’ve published plenty on DSLR production, so if you've passed on those articles, you’ll want to revisit them. If you’ve been on the fence about trying a DSLR, this could be the one you win.