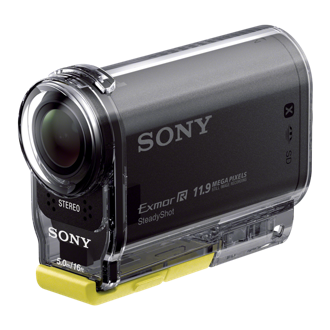 Sony has added another thoroughbred to their growing stable of narrow profile action cameras with the Action Cam HDR-AS20.

Building on the success of Sony’s existing lineup of Action Cams, the HDR-AS100V and HDR-AS30V, the HDR-AS20 smooths out wild mountain bike or surfing shots with Sony’s SteadyShot electronic image stabilization system. That stabilized image is aided by a ZEISS Tessar lens, and it’s huge 170-degree field of view will give adrenaline-fueled video enthusiasts a killer look at the action.

The 16.8-megapixel back-illuminated Exmor R CMOS sensor is capable of shooting 1080/60p, 1080/30p and 720/30p footage and can capture 11.9-megapixel still shots. Those hoping for 4K specs to take on the GoPro Hero 3+ and next spring’s rumored 4K30p Hero 4 will have to stay patient for now. Don’t judge a book by it’s cover just yet, however, as this sensor takes over where other action cameras fall down – dusk and other low-light shooting. Combine that with 28mbps high bit-rate recording, and the HDR-AS20 looks right at home with other high end action cams.[image:blog_post:50046]

And the HDR-AS20 is every bit as feature-rich as it is tech savvy. Integrated Wi-Fi allows the HDR-AS20 to be controlled by Android or iOS devices, or by Sony’s wearable – and waterproof – LCD-equipped RM-LVR1 Live-View remote.

There are also USB, HDMI and microphone plugs, as well as a memory card slot for storage. The HDR-AS20 ships with a waterproof case and some mounts to get started with, but a plethora of additional mounts are available separately from Sony.[image:blog_post:50051]

In addition to the feature set and killer optics, the Sony HDR-AS20's battery life is among the best on the market – an amazing 130 minutes of rolling time with Wi-Fi turned on (150 minutes with Wi-Fi off).

The HDR-AS20 can be had for about two Ben Franklins this August when it lands stateside.