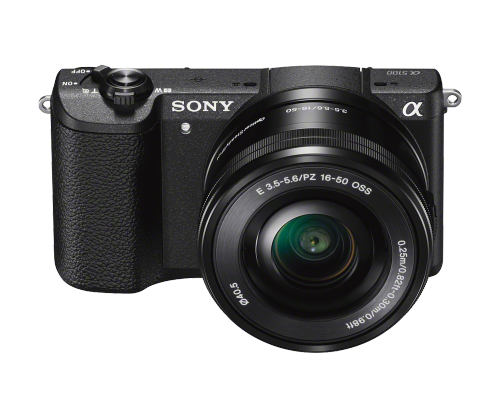 With all of the buzz flying around the video industry about the Sony a7S, another impressive mirrorless Sony cam – the Alpha 5100 (a5100) – nearly flew under the radar. The NEX-5T’s heir apparent brings some similar technology and some new features to the table in a nice, affordable package.

Similar to the NEX-5T it replaces are a 24.3 megapixel APS-C Exmor CMOS sensor and BIONZ X image processor. The big news for video enthusiasts is the inclusion of Sony’s professional grade video codec, XAVC. The XAVC is Sony’s Ultra High Definition codec, one designed to squeeze everything possible out of MPEG4/H.264, including frame sizes up to 4K and frame rates up to 120 fps. The a5100 is capable of shooting 1080p at 60, 30 and 24 frames per second using the XAVC S codec, and there are additional shooting and format options listed at the bottom of this article.

Oh, and in other awesome video news, the Alpha 5100 also supports uncompressed 8-bit 4:2:2 output via the HDMI output.

There’s more to the Alpha 5100 than just a sweet sensor and cool video codecs. This camera, like it’s predecessor, was created with killer autofocus in mind. The Fast Hybrid autofocus system uses 179 phase-detection points paired with 25 contrast-detection points for fast (0.07 second) and accurate autofocus.[image:blog_post:50726]

Also included with the Alpha 5100 is a selfie-friendly 921,600 dot 180-degree forward flipping LCD display, complete with the new addition of touch functionality.

For those dark and stormy nights, the Alpha 5100 is more sensitive than someone who just watched Les Misérables, capable up to ISO 25,600. Toss in manual focus peaking, zebra, and wi-fi with NFC connectivity, and the Alpha 5100 is a very capable addition to Sony’s already-stocked stable of mirrorless cameras.

The Alpha 5100 is more than happy to shoot in the following formats: