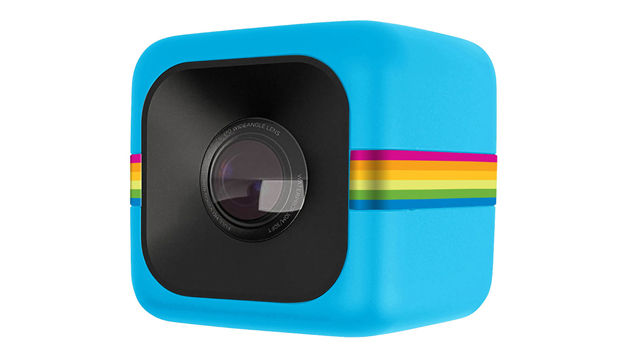 In the ever-filling action cam space, players are having to work harder to differentiate themselves from the pack. Polaroid has released a unique – and tiny – camera called the Cube. Designed like a child’s building block, the Cube takes up a tiny footprint and can record wide angle 1080p footage just about anywhere. The innovative addition of a magnet built into the casing allows the camera to stick to metal surfaces – or stack with other Cubes – for some unique shot options. A plethora of adorable accessories and mounts will be available when the Cube hits shelves this September. The $100 Cube stores footage to microSD cards and gets about 90 minutes of battery life, but when it comes to action, who needs much more?

Action cams are awesome for many things – attaching to helmets, handlebars, surfboards – but smooth, stable time lapse footage is not one of them. Their small size and “throw me under a bus” mission statement pretty much precludes them from high end optical image stabilization, and even just tasks where the camera is going to be stable at all. Fortunately, the researchers at Microsoft have created an algorithm that makes GoPro time lapse shots ultra smooth. Maybe even hypersmooth. Instead of regular video stabilization, Microsoft’s “Hyperlapse” method first calculates a 3D path of the camera and looks at the rough geometry of the scene. It then creates a smooth new optimized camera path, which paints a path for existing frames, which are then stitched together to create a new output.

BOXX, makers of high end production-oriented computer systems, recently released the 3DBOXX 4150 XTREME, the third generation of their 3D post production-targeted XTREME workstation. Screaming in at 4.5GHz, the 4150 aims to alleviate some of the workflow and render bottlenecks lesser machines can cause.

ProMAX announced the acquisition of video archive appliance corporation Cache-A, further expanding their capabilities in the area of network storage and archiving. According to Pro Max, Cache-A’s award winning archive appliances including Prime-Cache, Pro-Cache and Power-Cache will now be available from ProMAX and its authorized reseller partners around the world.

Unknown sources have claimed that the GoPro Hero 4 is most certainly in the works and is slated for a summer 2014 release. The same impressive specs which were circulated last fall are still hinted at, including 4K30p filming and 720p at 240fps, but there is no talk of the 2.7K frame rates. Rumors also include a second lens included specifically for night shooting, improved electronic image stabilization and a new dual-core SoC Ambarella A9 chip. Rumors on hot items like GoPros circulate pretty regularly, however, so take this one with a grain of salt.

DJI introduced the DJI Ronin, a three-axis handheld stabilized gimbal. With a payload of up to 16 pounds, the Ronin can carry cameras from a Sony NX5U to a RED EPIC. The device can be operated in single or dual operator mode. In dual operator mode a second operator remotely controls the precise camera angle using an included transmitter with pan, tilt and roll controls. The Ronin’s settings can be changed during the action via Bluetooth using an iPhone. Pricing is competitive at around three grand.