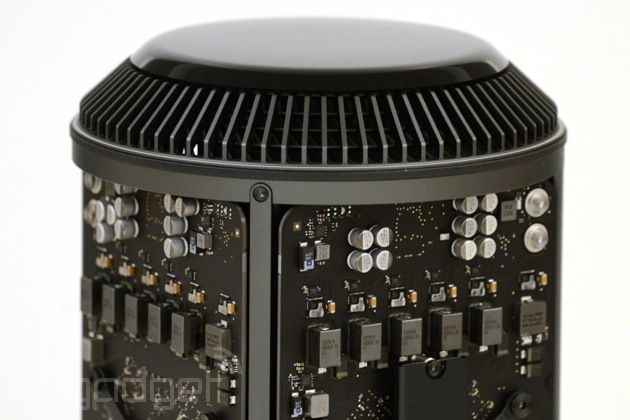 4K editors rejoice, as word on the street – according to Macworld UK – is that Intel is rolling out a new range of Xeon E5 processors for those in need of more parallel processing oomph. But will they be coming to a Mac Pro near you?

The new Intel processors are the likely replacement for high end workstations across the board for 2014, and it only makes sense: the Haswell-EP E5-2600 v3 processors are the direct descendants of the venerable chips found in today’s video production heavyweights: the current Mac Pros and Z-series HP systems.

When it comes to new video production workflows, high end workstations are par for the course, and more cores means more simultaneous processes. Intel and AMD have done battle over the highest end processors for ages, and the battle rages on, this time in the favor of Intel. A spec roadmap (leaked by ChipLoco) points out lowest end Intel Xeon E5 models starting at six cores over the current four core models, and the top of the line model rocking 18 cores.

The new Intel E5 v3 processors offer additional advantages over any previous models, as they are the first processors on the planet to support DDR4 memory. From this it can be assumed that the market will see faster memory in this year's crop of high end workstations, from the Dell Precisions, to HP’s Z-series, and also in a refreshed version of Apple’s new Mac Pro.

While it would be thrilling to see these processors appear in Apple’s sleek new Mac Pros, it's still hard to say if their tiny canisters can handle the heat or power consumption of the 18-core, though Mac fans can certainly keep their eyes peeled for a monster 14-core Mac Pro at some point. Apple has also been known to surprise us in the past, so we'll wait and see what Cook and Co. come up with. In the much more real near future, the new Intel E5 chips are expected to launch on September 9th in the Dell Precision tower and rack workstations we mentioned last week.

Combined with next-generation components such as GPUs from AMD and NVIDIA, pro video producers on either platform can look forward to workstations carrying heavier loads with greater ease.