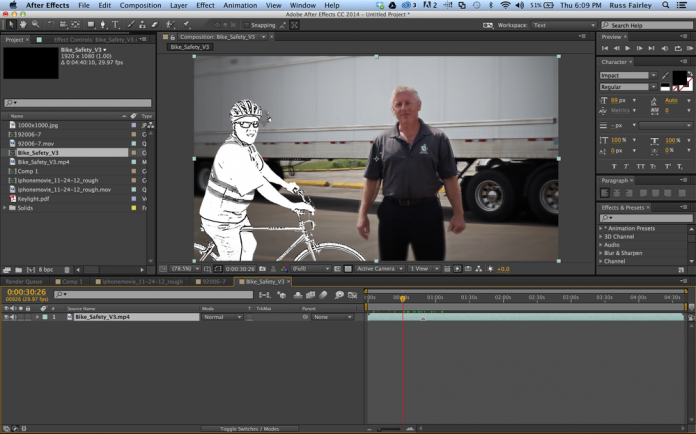 The possibilities for creating animations with Adobe After Effects are pretty close to limitless. We can composite complex scenes, add thousands of lens flares to Star Trek footage, or create fun graphics without any live action footage whatsoever.

So with all of these possibilities, how does one figure out exactly where to start? Well, there are scads of online and offline resources, and the After Effects user guide and Help functions will help with the basics – the interface, controls, layout, etc. – but at some point it’s important to start having fun with the program.

Let’s take a look at a few beginner techniques to get started using After Effects. To do these quick and simple exercises, you’ll need a few things:

Once you have all of these things, import them into an After Effects project (control-I on Windows, command-I on Mac, or double click the Project window).

After Effects is a tool for motion graphics. Animating – or making something change or perform actions over a time period – is where After Effects shines. It’s possible to do incredible top-level animation with After Effects, but it is important to first learn to walk before learning to run.

To start, let’s create a new composition – or comp – that matches our footage dimentions and settings. We could create a comp using the menus in After Effects, but as long as we’re learning tricks, let’s make this even easier. Select the footage to be used in the Project window, and click and drag it onto the “Create a New Composition” icon right at the bottom of the Project window. This will automatically format a composition to match the settings of the footage being used. It will match the size, frame rate and length of the clip being used.

Now that we have a composition, you’ll notice the footage appears as a layer in the timeline window, and a look at the first frame will show up in the Composition window.

First, look for a small twirl-down arrow to the left of your footage’s name. Click the arrow to reveal the Transform properties for the footage. All of these properties – Anchor Point, Position, Scale, Rotation and Opacity – can be animated. Note the small stopwatches next to each property name. We’ll use these stopwatches to create keyframes, which will determine the property value at that time on the timeline.

Start by clicking on the “100%” property next to Opacity and replace 100 with 0. This will reduce the layer opacity to 0%.

Next, drag the Current Time Indicator (CTI – the time indicator which moves over the timeline – look for a red line with a yellow arrow atop it) to the one second mark. There are other ways to do this, but that’s for another day.

Now change the opacity value to 100. This will increase the opacity of the layer to 100%. Notice the footage has appeared.

Take the CTI back to the beginning of the footage and hit the spacebar to preview the animation.

Congratulations! You’ve completed your first animation. Try creating keyframes to animate the other properties, such as Scale and Rotation.

Remember: there are no rules, so experiment away!

Removing a greenscreen from footage – or keying – might seem like a huge leap from fading in footage – and it is – but it’s a particularly neat and fun one. While keying is truly an art form unto itself, performing a very simple first test isn’t, and this can merely act as inspiration for a long journey with keying.

First, we’ll make a new composition. Let’s make this one the same way as last time. Drag the greenscreen footage onto the “Create a New Composition” button at the bottom of the project window.

Just for fun, drag the clip from the first lesson into the Timeline window and place it just below the greenscreen footage in the layer stack.

In the top menu, choose Effect, Keying, Keylight. There are many keyers, but this one from The Foundry is excellent, and ships with After Effects.

Next to Screen Colour (note the British spelling), select the eyedropper tool. This will allow you to choose the color to be removed from the footage.
With the eyedropper selected, click on the green background in your footage.

Voila! There is a lot more that can be done to clean up this keying job, but this is simply a start. Check out Videomaker's Instruction Videos, Jeff Foster’s “The Greenscreen Handbook” and Video Copilot’s #10 tutorial – Basic Color Keying – to take your next keying project to another level.

Start by choosing the text tool from the tool panel at the top of the After Effects interface. Click in the composition window (or preview window) to bring up a text cursor.

In the Character Panel on the right hand side of the interface, change the font to “Impact”. We want something with a bit of heft.

Type a word. Russ is always a good one to use. If the text is too huge or tiny, it can be adjusted in the Character Panel on the right hand side of the screen as well.

Once you’re happy with your word (move it around, scale it up, have fun), drag the texture image from the project window to below your text layer in the layer stack. It will appear behind your text.

Next, change the TrkMat (Track Matte) switch to “Alpha Matte “X””, where X is your text layer name.

Voila! Your texture should now appear on your text.

4. Add a pretty background to your image

Leave your cool textured text where it is. Let’s make it a nice background.

The solid will appear over your text, as it’s at the top of the layer stack. Drag it to the bottom of the stack. Your text will reappear.

Now select Effect, Generate, Gradient Ramp (older versions of After Effects may simply say Ramp). A gradient will appear on the solid layer and the settings for the Gradient Ramp effect will appear in the Effect Control panel (the second tab next to the Project window tab).

Change the Start Color to white, and the End Color to something nice, like a medium red or blue.

Ta da! There are more options, but this is a fun start to making a background!

We'll be sharing more beginner tips for After Effects in the near future, so stay tuned to Videomaker.com!