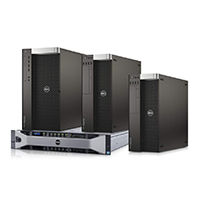 Dell this week announced the imminent arrival of new members of the Precision series of workstations. Three new tower models – the 5810, 7810 and top-of-the-line 7910 – as well as a rack version of the 7910 are landing in power-hungry production offices as of September 9, 2014.

The new workstations have been updated across the board. They are all powered by the latest Intel Xeon processors, up to a terabyte of DDR4 memory, and top-level NVIDIA Quadro and AMD FirePro graphic card options.

Also adding to the performance boost is the inclusion of Thunderbolt 2 technology, which supports data transfer speeds of up to 20Gb/s while allowing for simultaneous 4k video file transfers.

Dell has also included the latest version of their innovative Dell Precision Optimizer v2.0 (DPO) software. DPO runs in the background and optimizes system settings, based on the applications which are running. Playing around in After Effects? DPO will fiddle with system settings to get your particle systems humming. Not sold? Dell claims that industry standard benchmark tests have proven that DPO increases application performance by up to 121 percent.

Finally, Dell’s announcement included the rack version of their top-level workstation, with the Dell Precision Rack 7910. This workstation offers all of the capabilities of the Tower 7910 in a 2U rack form factor. Not only is it shipping with complete qualification and support for workstation virtualization with Citrix XenServer and VMware ESX hypervisors, it is also the first Dell Precision workstation to include an Integrated Dell Remote Access Controller (iDRAC), which increases security by enabling complete remote datacenter manageability in a “lights out” environment.

For more information, read the release below or visit Dell’s website.