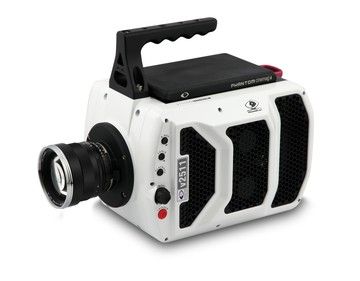 Vision Research announced the release of not only theirs, but the industry’s fastest camera yet, the Phantom v2511. The v2511 is part of the v-series of one-megapixel digital high speed cameras, and the numbers this thing posts are staggering.

At it’s full megapixel resolution the v2511 can capture and save more than 25-gigapixels-per-second of data. With the v2511’s proprietary widescreen CMOS sensor that translates to this beast churning out 1280 x 800 footage at 25,600 frames per second. If our math is correct, this footage played back at 30 frames per second means that the viewer will actually be viewing 853 frames for each second of footage, meaning ultimately smooth – and slow – slow motion.

It gets crazier. Once the camera starts choking back the resolution, the speed ramps up considerably. How crazy are we talking? How about 677,000 frames per second? Not fast enough? With the export-controlled FAST option, the v2511 can shoot 128 x 32 footage at up to one million frames per second.

Loaded up with the same ports and connections as the rest of the Phantom high speed camera lineup, as well as a Nikon F-mount that supports G-mount lenses, the v2511 is as versatile as it is powerful. It’s also available with Canon EF, C-Mount and PL-mount.

Combine that with up to 96GB high speed memory and both color and monochrome versions, and the v2511 is a force to be reckoned with in the high speed camera world.

Following in the footsteps of the rest of the Phantom lineup, particularly the incredible Phantom Flex4K, isn’t easy, but the v2511 brings solid features and astonishing speed to up a game they already owned.

Pricing for the v2511’s fall release hasn’t been announced yet, but predecessors have run right around the six figure mark, so start saving now.