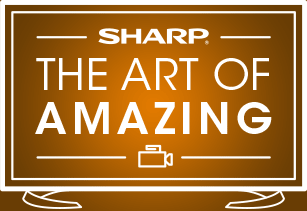 Sharp announced this week the return of their Art of Amazing 4K Film Competition, an event designed to show off the benefits of ultra high resolution entertainment. Sharp has been at the forefront of 4K Ultra HD resolution adoption, launching their first THX 4K certified television in 2013 and bringing out two updated models this year.

In partnership with heavyweights RED and THX, and collaborating with Lucasfilm, The California Film Institute, and Adobe, the Sharp Art of Amazing 4K Film Competition encourages filmmakers to create short, compelling 4K films and enter them for judging.

Submissions for this competition should be directed to www.sharpusa.com/ArtofAmazing prior to September 7, 2014, with up to 15 finalists being determined during the following week. The finalists will be posted in the Art of Amazing Film gallery, where visitors can vote on their favorite submissions for a chance to win a 4K prize package. There’s great incentive to vote, too. Fans who vote for films will be eligible to win be eligible to win a THX 4K Certified* 70” class Sharp AQUOS 4K Ultra HD LED TV valued at $4,500.

The finalists chosen by a panel of industry judges will have their films screened at The California Film Institute’s prestigious Mill Valley Film Festival being held October 2 – 12, 2014. It gets better, however. The finalists will also be given Filmmaker passes to the festival, as well as receive a private THX tour of the one and only Skywalker Ranch, birthplace of THX, and the blockbuster movie franchise, Star Wars.

If being a finalist is good, then winning is even better.

The Grand Prize winner will receive an astonishing prize package, including a (get ready for some acronyms) 70” class THX Certified AQUOS 4K Ultra HD LED TV valued at $4,500, a 6K Scarlet-X RED Dragon Light Weight Collection valued at over $23,000, and a trip for two to CES 2015 in Las Vegas, with hotel and airfare totalling approximately $10,000.[image:blog_post:49411]

That’s a lot of prizes, but it doesn’t end there. The festival audience will also choose a favorite film, with the winner eligible to receive a 60” THX Certified* Sharp AQUOS 4K Ultra HD LED TV ($3,500 value).