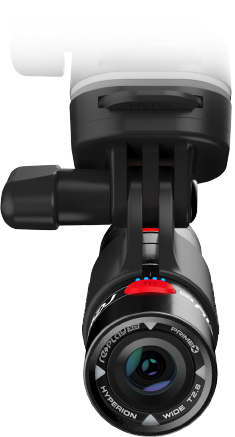 Replay XD announced the upcoming release of the Replay XD Prime X this week. The Prime X is the fourth generation of robust action cameras from Replay XD, and it looks to improve on the success of previous models in a number of ways.

Sticking with the highly-placeable column-shaped body style, the Prime X doesn’t appear terribly different from previous generations at first glance. Closer inspection will reveal a number of minor aesthetic and ergonomic changes, adding up to a nicely finessed design. The buttons are easier to press, the textures are thoughtfully employed and the rear control panel gives the user far greater feedback as to what the camera is set to do.[image:blog_post:49036]

The magic of the Prime X, though, is in the major changes added internally.

The bulk of the interior of the camera is used to house a much larger and higher capacity 1700 mAh battery. The result is more than double the life of previous generations, with up to 3.5 hours of operation on a single charge. That charging has improved as well, with a rapid charge feature that cuts charging time in half.

All of that wouldn’t mean a whole lot if the image quality of the camera wasn’t great. Shooting anywhere from 720p at 120 frames per second, all the way up to 1200p at 60 frames per second, the Prime X has upped Replay XD’s imaging game even further with a new ultra-fast 1/2.3 inch, 16MP CMOS sensor and some new fast glass.[image:blog_post:49031]

That glass is what Replay XD is referring to as the Hyperion CinePrime X Lens. The lens features a 140 degree natural wide angle field of view operating at T/2.8 at f2.7. What kicks this lens up a notch are it’s high-end cinema lens features, such as Special Low Dispersion (SLD) elements, CineAR anti-reflection coatings and improved chromatic correction. This nice piece of glass is protected by an impact-resistant glass lens cover window.

The goal with the the improved internals of the Prime X is a truly cinematic look and feel in everything it shoots.