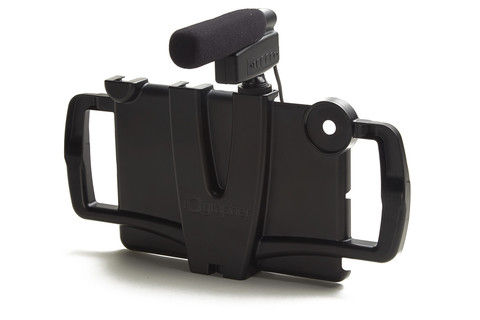 Making a splash this year's NAB Show, the iOgrapher for iPad and iPad Mini are innovative snap-on iPad cases that take an iPad and give it everything it needs to shoot quality video.

Formed from high grade polycarbonate, the iOgrapher is sturdy, durable and lightweight. The case snaps over the iPad and holds it snugly, but kindly releases it with a simple twist of the iOgrapher's side handles.?

As filmmakers, videographers, and video enthusiasts all know, tablets have great uses for shot logging, contract management, choosing lenses for a scene and more, but they have historically come up short when using the device as an actual video camera.

The integrated iPad camera works just fine, and apps like Filmic Pro take the camera capabilities to the next level, but there are drawbacks that come from the inherent design and hardware. Decent video needs more than just good visuals. Clean audio, appropriate lighting and a stable shot all contribute to make a pro shot. This is where the brilliance in the iOgrapher is showcased – it takes a great device and not only adds features and stability, but overlays mounts that change the makeup of the device on the whole.

What kinds of things change an iPad into a video camera? Well, three integrated cold shoes make mounting microphones and lights a breeze, and a set of side handles and tripod mount give multiple stable options for shooting. And that's not all – what's a camera without the ability to change focal length and reframe a shot optically? While the iPad may have a fixed lens and be limited to digital zooming, the iOgrapher has a lens mount that allows the shooter to thread in any 37mm lens. Yep. Telephoto iPad. Macro iPad. Wide-angle iPad.

All in all, the iOgrapher takes the already-competent iPad and adds some desirable functionality for the video fan in all of us. Keep an eye on iOgrapher.com as well – they've released a model for iPhone, and have just announced new iOgraphers for the latest iPad Air as well as their own line of lenses.

The idea of the iPad has been around for a long time. Steve Jobs hinted at his vision of a powerful and highly-connected device that users could "carry around like a book" during a speech way back in 1983. Heck, we didn't even have flip phones back then. Good idea or not, it took until 2010 for the first iPad to hit the market, and even longer for us all to unwrap all of the possibilities with it.

Thanks to the folks at iOgrapher, we can now realize another of those possibilities and Steve's vision has been given another facet.

Keep making video and have fun doing it!