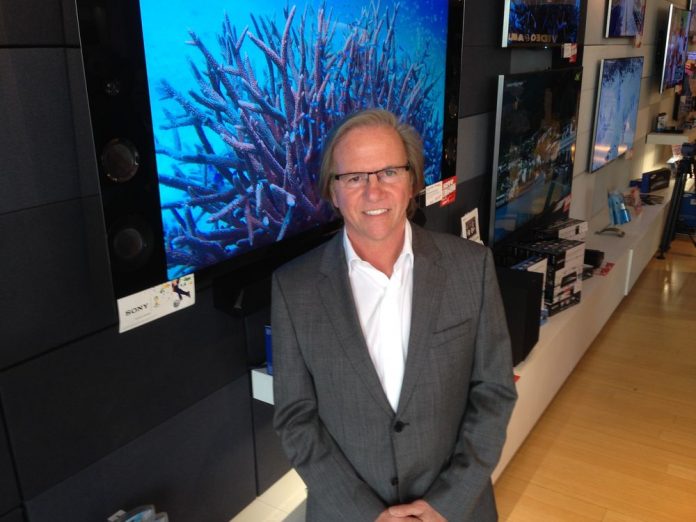 The grand opening of the Video and Audio Center’s Century City store made an impact by hosting the world-wide launch for a new generation of Sony 4K Ultra HD TVs. These models, which are immediately available, feature enhanced brightness and color palettes, all at prices designed to be consumer-friendly. Sony Electronics President, Mike Fasulo, furthers this latest Sony push for bringing 4K viewing into the home by making himself available to answer a few questions.

Videomaker: At first it wasn’t just high-definition that got consumers interested — the form factor of the flat panel also played a part. But now that “flat” is an accepted convention, is the 4K resolution enough on its own to drive the consumer to a 4K Ultra HD TV?

Mike Fasulo: It’s not just about resolution so much as it is about the immersiveness of the entertainment package. Obviously we lead with video quality, and with Sony’s background in 4K, anything you play on it, whether it’s high-definition, Blu-ray disc, DVD or native 4K is going to look better. But we need to pair that off also with audio — when we pair the two together it becomes an unbelievable, pleasant experience that we’re seeing customers buy into day in and day out. The other good news is, with HD being out for a few years now, the replacement business is happening, with people starting to think about their next television set. With the new line of Sony 4K Ultra HD, they’re future proof. So if you buy into it today it’s going to last you for years to come. They’re smart TVs; they’re Internet ready. You can stream and do everything that you need and want them to do.

Videomaker: Sony’s involvement with 4K doesn’t stop at just 4K TVs — there’s also producing the content and delivering it to the consumer. Is this a potent way to promote 4K for the home?

Mike Fasulo: Absolutely. You go to any of the 13,000 theaters across this great nation and you’re watching a movie — it’s being delivered by 4K professional projectors. That’s the same technology we’ve put into televisions for the home. Our studio at Sony Pictures are shooting on Sony cameras that are providing native 4K, and that content is coming in Blu-ray and ultimately through the download servers of the Video Unlimited service. So it is a total eco-system. We’ve been doing this for quite some time on the professional side and we’re now moving into the consumer side. So you can get almost the same experience in your living room that you get in the theater with what Sony has made possible.

Videomaker: There are those who say that consumers wanting to watch sports in HD drove broadcasters to accelerate their other HD offerings. But with 720p being the resolution of choice right now, how can broadcasters be convinced to provide native 4K video for watching on 4K TVs?

Mike Fasulo: That’s a great question. And this is where creating a market is going to take some time. The good news here is that, unlike when we launched high-definition, all segments, all the verticals of the business — whether it’s sports, whether it’s entertainment, pictures, or television shows — all are moving towards 4K technology and beyond. One of the things we’re doing is with The FIFA World Cup in Brazil this summer; it’s being sponsored by Sony. Sony is a title sponsor. We’re going to capture 11 events in 4K, which we can bring back, and share with consumers.