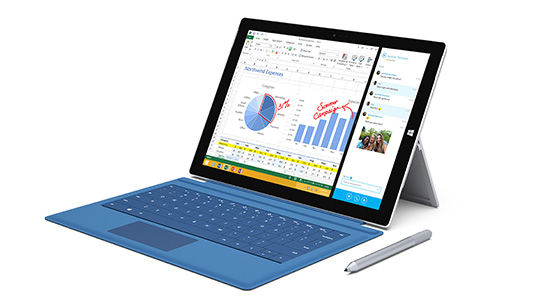 Computers are an ubiquitous part of any video production, from planning in pre-production, all the way to final finishing in post-production. Tablets and mobile devices have entered into the landscape that was once occupied by laptops. They’re able to accomplish many tasks but are limited in what they can do. A tablet is great for pre-production, scripting, storyboarding, and scheduling. They’re even used on set to slate takes and run teleprompter software, but they’re not viewed as technology that can handle true post-production tasks. Just like it happened with laptops, the capabilities of tablets are changing. Microsoft announced the forthcoming Surface 3 tablet, a tablet that is able to run the Adobe Creative Cloud suite of applications.

The Microsoft Surface Pro 3 is a power packed tablet, expanding on the computing power of a laptop with the functionality of a tablet. The Surface Pro 3 is 12-inch tablet with a screen resolution that comes in at a sharp 2160 x 1440. It is powered by a 4th generation Intel Core processor, i3, i5, or i7, making it able to handle desktop Windows applications such as Adobe Creative Cloud. Users can take advantage of the Surface Pen and multi-position kickstand to  to express their creativity through Adobe Photoshop, Illustrator, and even draw masks in Adobe After Effects. Internal storage on the Surface Pro 3 comes in options of 64 GB, 128 GB, 256 GB, and 512 GB. Pricing ranges from $799 for a Surface Pro 3 with 64 GB of storage and an Intel i3 processor, to $1949 for a model with 512 GB of storage and an Intel i7 processor. Microsoft will start taking preorders on May 21.
Chris "Ace" Gates is a four time Emmy Award-winning writer and video producer.