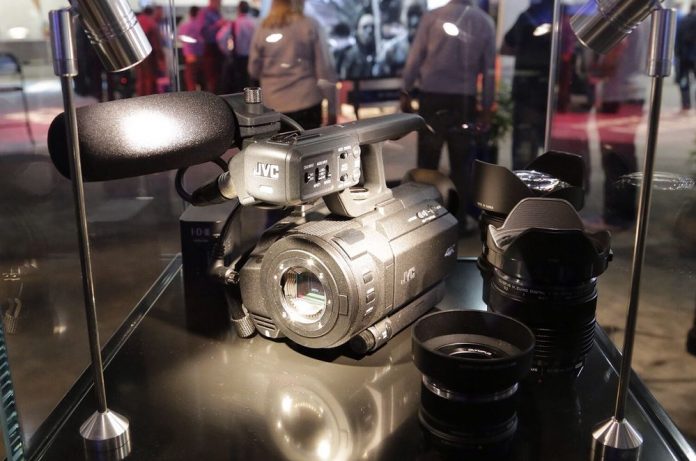 Two pieces tend to get a little more common around this time of year, but we can't think of another instance that JVC has ever used "two-piece" to describe one of their cameras. The GY-LSX2 is a handheld version of the GY-LSX1. The LSX2 uses Micro Four Thirds lenses and has an AltaSens 13.6MP CMOS sensor. The sister company also develops the sensor for a mini 4K camera, the GW-SPLS1. This one records to SDHC cards, no word yet on limits though.

When you've got small cameras, what do you do? Send them flying, and that's what JVC has at their booth with the GW-GBLS1, another small camera. This time however, the camera has a gimbal and can capture 4K video with its Super 35mm CMOS sensor at either 4096×2160 or 3840×2160 at 60 frames per second. JVC acknowledges that news gatherers are not yet ready to use UAVs for video, but we have to agree that it might be the future.

On a different note, but looking ahead JVC has a pair of disc duplicating decks, the SR-HD1350US and SR-HD1700US. The SR-HD1700US either one can do DVD and Blu-ray. They may not be the flashiest product in your studio, but being able to burn discs from a live video feed or hard drives is indeed a great combo. For many of you, rejoice; legacy compatibility includes S-Video and FireWire, in addition to SD/SDHC cards.

The HD1700 adds 180GB in hard drive space, transfers via LAN and can take MOVs and MXF from JVC's ProHD cameras. As the greater of the two it's $2,995 while the HD1350 is $1,595. Among the announcements from JVC, the cameras are mainly prototypes, so news is still to come on them, while the disc decks are available immediately.