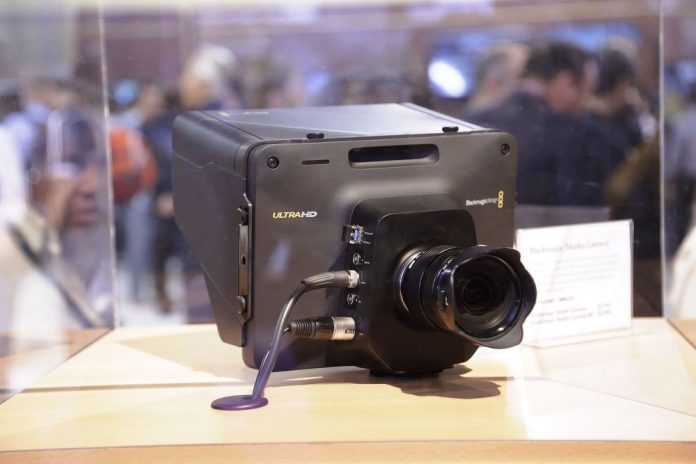 Among the great camera discussions, Blackmagic Design has brought forth some unique topics, workflow being one of them. The Blackmagic Studio Camera and seeks to dispel the notion that broadcast cameras are the only ones well-suited for live production. Even then, with so many variables in live production (for reference, in all of our webcasts we've had different setups each and every time), we can't name many cameras that are really built just for live production. Back to the studio camera, it's durable, can talkback, tally, and show off video with a large display. If those don't cue you up to live production, maybe you're among those that aren't in a major studio!

We're vigilantly searching for competitively priced cameras and the Blackmagic Studio Camera falls right in many of our budgets at $1,995. The features address many questions that have been brought to Blackmagic Design, here are some answers: two XLR mics, SDI connectors, a massive 10-inch display, four-hour battery life and the full complement of frame rates for 1920×1080. One question will be how the dynamic range is and how easily the side panels let you control the camera? The question of recording also comes to light, since it simply might not be necessary. Beyond the camera if the crew behind a production can't communicate, entire cameras can become useless, so the capability for digital two way talkback is great.

Little touches that make a difference in repetitive productions may include but are not limited to the following: a sunshade for the monitor, phantom power for mics, active Micro Four Thirds mount, optical fiber, and LANC control. The Blackmagic Studio Camera may really fall in stride with many productions, so it'll be exciting to watch. The team at Blackmagic Design also brings more relevant news, for one, the ATEM 2 M/E Production Studio 4K live production switcher. It'll work well with studio cameras, and costs $3,995.

Rather than get wrapped up in all the goodness that is studio production, our press pass takes us to the URSA, a beast of a camera that is meant to be handled by both number operators or one. The URSA grabs the 10-inch monitor from the little Blackmagic Studio Camera, and adds options for an EF or PL mount. The sensor allows 4K video through a Super 35 global shutter and sends images to internal dual Apple ProRes or RAW recorders. The features of the camera have been divided into their jobs for a director of photography, audio engineer and camera assistant.

We'll do our best to see it in Las Vegas, but we're talking about in-the-field swaps of the image sensor so it sounds like there's some true magic happening with the four versions of Blackmagic URSA. We'll look to get more answers from Blackmagic Design come this June and July when it's set to become available for $6,000.

Now all we need to do is determine the company name from the actual camera!