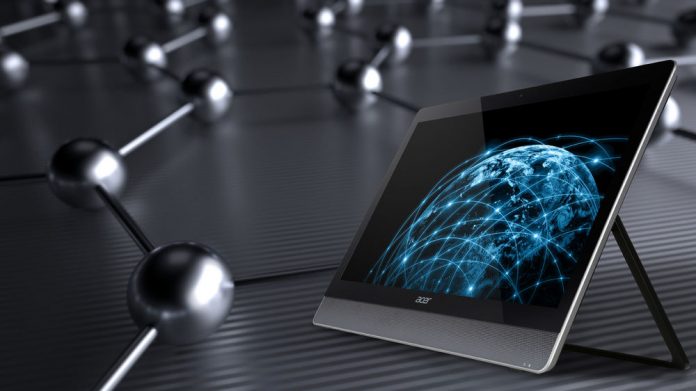 Acer knows how to throw a press release. Top notch breakfast, a well planned audio visual presentation lead by Acer’s new CEO and Corporate President Jason Chen and two rooms filled with the soon-to-be-released product open for the press to test ride; an over all good morning at the standing-room-only event in New York City.

The super thin Aspire E11 and V11 both have fan-less technology for quite computing. The Switch 10 snaps magnetically together and apart to form a laptop or tablet. The Iconia Tab 7 can be used as a phone and both the Tab 7 and the One 7 have a microSD card slot. The Aspire U5 is a 23-inch tablet/computer hybrid with USB and HDMI ports and choice of Blu-ray or DVD. For more states on these new devices go to www.acer.com.

Acer’s top brass were especially proud of The Acer Snap Hinge, which comes with a magnetic detachable design for smooth transitions and a latch-less docking experience when transforming your Aspire Switch 10 laptop into a tablet.

Acer also “leaked” wearable technology that we should expect to see in the late summer in the form of a wristband that tracks your activity and can be used for messaging. They also mentioned Acer Cloud: their own cloud service.

So do these ten products really mean for video creators like you and me? Powerful yet small PC laptops or 23-inch desktops to edit on and tablets to show our videos off to the world… and read the digital version of Videomaker, of course.