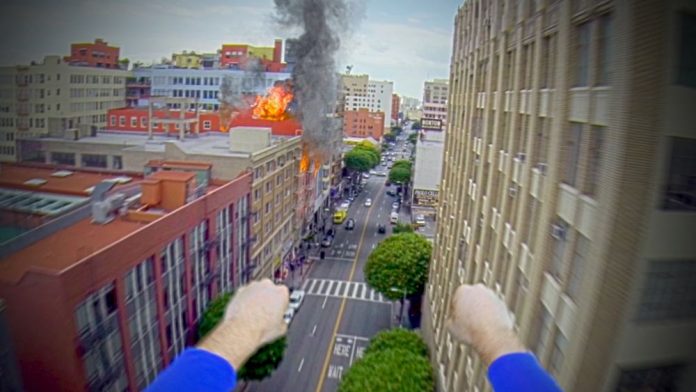 Niko Pueringer and Sam Gorski are the masterminds behind the YouTube channel CorridorDigital. As described on their Patreon page, they are “a small team of Internet-video creators…[that] specialize in dreaming up sci-fi, action, and video game-inspired YouTube videos, jam-packed with stunning VFX and movie-like cinematography.”

Since 2010 Sam and Niko have been blowing the internet away with their action and VFX videos. From bringing to life popular video games like Halo, Assassin’s Creed and Minecraft, to creating their own action adventures like Sync and Dubstep Guns. With over 2 Million subscribers and over 237 million views on their YouTube Channel, it’s clear to see that this dynamic duo know a thing or two about making high quality, professional online video.

In their latest video, Sam and Niko answer the age old question, “What would it look like if Superman wore a GoPro for a day?”

As described on the DroneFly website, “The Zenmuse H3-2D 2-axis gimbal is a motorized stabilizer for mounting a GoPro, HERO3, or HERO3+ action camera. It helps isolate the camera from vibration incurred by the rotors to give you the smoothest possible aerial video. In addition, it allows the camera to tilt between -130 to +50° with a precision of ±0.08°. Tilting is controlled via an attachment that goes on the back of the transmitter.”

The DJI Phantom 2 has a built in GPS so it can be found if the drone is ever out of sight. It also has a video transmitter so they can monitor the shots as it’s being recorded.

There are multiple layers that go into making Superman super.

To give the illusion of Superman taking flight Sam and Niko would match-edit the action from their actor taking flight and then fly the drone from that same position so it could make a seamless transition. Additionally when Superman would land they would cut to a match edit from the same position to show Superman landing to save the day.

Additionally they recorded Superman’s arms separately on a green screen and added them in post, because actually flying someone over the city is a bit dangerous. This was particularly impressive because of how well they were able to match the lighting to make the arms appear as though they were really flying above the city.

They also wanted to sell the “super speed” of Superman flying in the air through speed ramping and time remapping. In order to do this they had to find open locations that were clear of many moving objects, like cars, so that when they sped up the footage everything looked like it was moving in normal speed.

This video could have been a typical GoPro video and just show off the great shots you can get with a drone, but by adding a narrative, action and VFX this video became a viral hit. At the posting of this article the video has been up for one week and already has over 11 million views.

It just goes to show that with a GoPro, a Drone and some super VFX skills, you can make a video that goes above and beyond the average video.