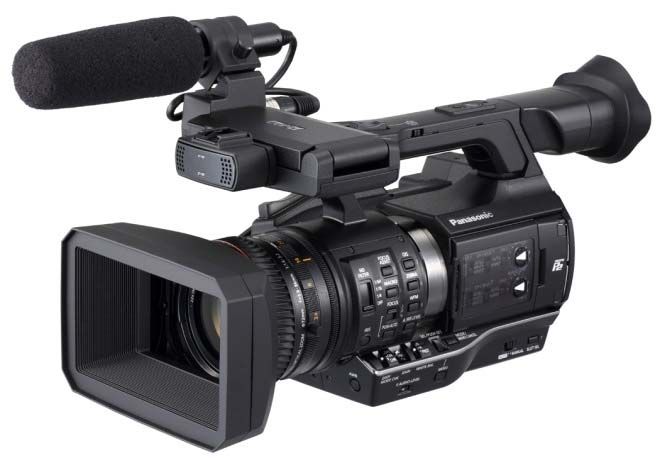 Videomaker had the great pleasure and privilege to attend the Panasonic pre NAB briefing this last Thursday, February 27 in a New York City office on Fifth Avenue and 23rd Street. The Iconic Flat Iron building looked down on us as we entered the office building for the afternoon meeting. Unfortunately Panasonic did not physically have any of the three cameras or the 4K LDC reference monitor that they “unveiled,” we had to settle with a PowerPoint slide show. Then again, the whole point of a pre-NAB briefing is to get the public excited as to what to expect at this year's National Association of Broadcasters Show (NAB) in Las Vegas April 5 – 10.

Steve Cooperman, Senior Product Manager at Panasonic North America, started us off that afternoon with Panasonic’s first P2 HD handheld camcorder with AVC-ULTRA recording. The five-pound, all black AJ-PX270 looks to be a similar size to their HPX and HVX models. Panasonic dramatically upped the ante with the PX270 by transforming a camera popular with budget-minded cinema creators to include many features that will impress news gatherers as well as sports, corporate, education and event shooters.

Panasonic claims the camera possesses newly developed, high-sensitivity, low-noise 1/3” 3-MOS imagers, which represent colors better than before and works well in low-light situations. One can tell from the many on-body buttons, switches, dials and lens rings that this hand-held gives the shooter the creative controls usually only found on shoulder mount, production cameras. The three manual lens rings for zoom, focus and iris are impressive on a camera this small. The 22X zoom with a 28mm to 616mm (35mm equivalent) range should keep most non-changeable lens shooters happy.

The prosumer camera records to traditional P2, Micro P2 and SD cards. The one-year-old, solid-state Micro P2 card is the size of an SDXC/SDHC card but has the transfer speed, capacity (32 GB/64 GB), reliability and security of the larger and more expensive P2 cards. The camera has two Micro P2, one normal-sized P2 and an SD card slot.

The multitude of recording capabilities or frame size/frames per second options are dizzying; from 1080/59.94p to 480/29.97p and many in-between. The variable frame rates in 1080/59.94p range from 1fps to 60fps and include the standard 24fps, 25fps for our European friends and 30fps. News gatherers and reality show shooters will be interested in the PX270’s built-in wireless capabilities. Wireless LAN functions are available via an optional Wireless LAN dongle, streaming and FTP via a 3G/4G/LTE network will be available in the near future and the ability to uplink low-bit rate proxy and full-quality broadcast content is available.

There are plenty of choices for professional interfaces: HDMI out, HD/SD-SDI out, 3G-SDI out to support 1080 60p output, genlock in for multi-camera operation, timecode in/out and USB 3.0 and 2.0 options. Visit Panasonic online to learn even more about the many technical stats behind their new $6,495 suggested list priced handheld camera: www.panasonic.com/broadcast.

The twenty or so journalists in the conference room let out a collect, “awe” when Cooperman put an image of Panasonic's two new VariCam 4K cameras on the screen: the VariCam 35 and VariCam HS. Both models are due this fall and pricing has yet to be determined. Here are a few of the stats to get those with deeper pockets excited. The VariCam 35, as the name implies, is made for high-end filmmakers, commercial shooters, episodic production and live events. The 35mm MOS sensor creates 4K RAW, native 4069 (17:9) images. 14+ stops of latitude should assure a pleasing wide dynamic range. It boasts variable speed 4K recording up to 120fps.

Cooperman explained that Panasonic is looking toward quality, not quantity when deciding on the fast frame rate on this higher-end camera. “We could have gone to 1000fps if we wanted," the Senior Product Manager said.

The VariCam HS or High Speed, is a 1080p camera. The AVC Ultra Codec family provides 12-bit 4:4:4 acquisition and efficient 4:2:2 10-bit recording. Frame rates can be ramped or changed during recording and peak at 240fps in some modes. 14 stops of dynamic range and 24-bit LPCM audio capabilities should impress and all of this is stored on ExpressP2, standard p2 and/or MicroP2.

We thanked the five Panasonic representatives, said goodbye to a few of the other journalists and stepped out of the hour-long meeting into the frigid New York City winter air, even more excited for a visit to the desert in Las Vegas’s NAB gathering next month.