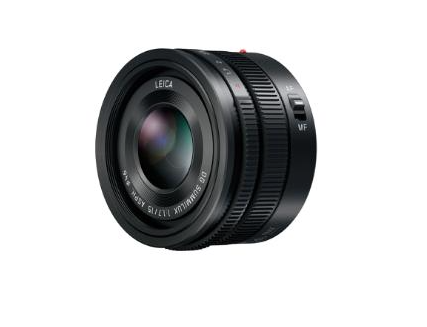 The Leica DG Summilux 15mm/F1.7 ASPH is a prime lens for the micro four thirds format. It's comparative to a 30mm lens in the 35mm camera format. The high speed F1.7 lens is able to capture clean images in lower light, as well as grant the photographer, or videographer, a shallow depth of field. Panasonic was able to make the lens small and lightweight, in part due to the micro four thirds format, but also by utilizing three aspherical lens elements in the nine element optical system. The aspherical lens elements help to reduce the lens distortions common in wide angle lens. This results in an image without distortion. The lenses are coated with Panasonic's Nano Surface Coating technology to reduce and eliminate lens flares and chromatic aberrations.

An important feature for videographers is the new stepping motor for focusing that is smooth and silent when recording. The Leica DG Summilux 15mm can be adjusted manually or by autofocus, depending on what the user chooses. The lens' metal body and mount contribute to its durability, a welcome functionality in interchangeable lenses. The Leica DG Summilux 15mm micro four third lens will be available in May with a suggested retail price of $599.99.