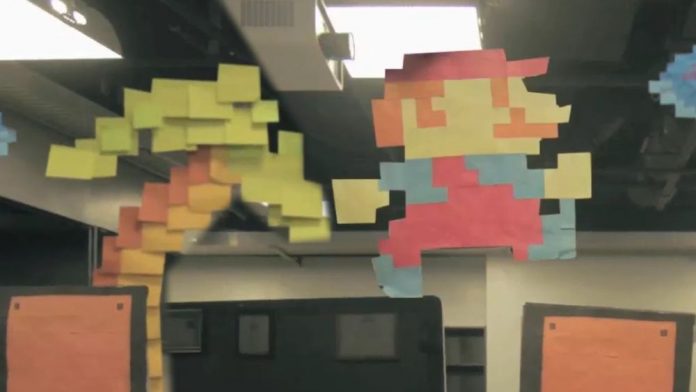 Zach King is a well known member of the YouTube video community. He got his start online by making Final Cut Pro video tutorials on his YouTube channel Final Cut King. As he grew his audience, and his skill set, King later started showcasing his creative works online. Many of Zach King's videos bring fictional elements into the real world, includeing the videos Jedi Kittens, Real Life Portal Gun, and many more. These creative videos has garnered King more than 88 million views on his YouTube channel and more than one million followers on Vine. In this video Zach King brings the classic video game character Mario into the real world using stop motion, and several thousand post it notes in Mario – Post It Life.

Making stop motion videos is not easy task. In traditional video, the camera is recording at 24 frames per second; in order to recreate that aesthetic with stop motion you have to re-create each individual frame. To do this, Zach King purchased 7000 Post It notes to assemble his set and create his stop motion Mario. To make Mario move, King had to create five different Marios each with a different position. King switched out the different Marios, took a still frame picture, then moved Mario slightly forward, and would repeat the process, so that when the shots were edited together, Mario appeared to be running and jumping through the Post It environment.

To avoid any inconsistencies, and to match the video game aesthetic of side scrolling, Zach King utilized a home-made dolly that allowed him to slide his camera along a smooth plane. This allowed King to match each of the pictures together to make the video look cohesive and well put together. Additionally to make Mario pop out onto the non two-dimensional surface, King took a picture of the background without Mario, then took another picture with himself holding Mario in place. He then edited himself out of the photo in post using Motion. (Be sure to watch the behind the scenes video, too, that links to this entertaining Mario – Post It Life video.)

The thing about stop motion video is that it takes a lot of work. Recreating one minute of video means taking up to 1440 individual photos. Taking that many photos means you have to pay a great attention to detail. Making stop motion video can be great practice for pre-production planning. Not only do you need to know what the final product is going to look like before hand, but you have to build and move your "set" and "actors" frame by frame. Without proper planning and vision this fun intricate video would not have been possible. Zach King states that, "If you screw something up, you have to re-do it."

Stop motion video is what got Zach King into film. He started by making claymation movies at home and those beginnings have helped him grow into a very talented and imaginative filmmaker. Zach states, "It's time consuming but if you put some good work into it, it pays off."