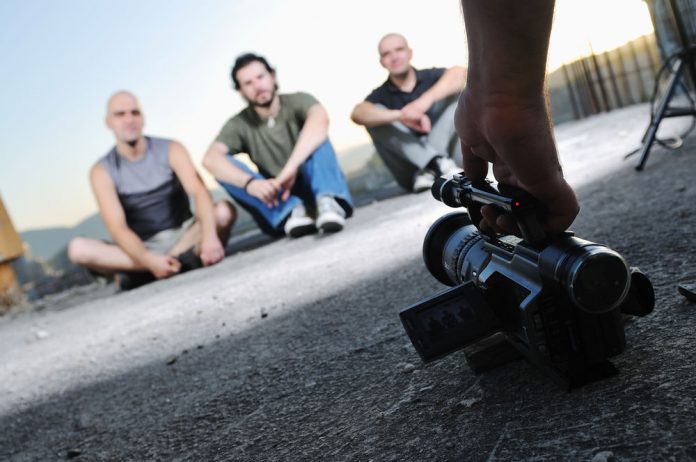 Most of the time, most people producing most videos shoot most of their shots from the same single perspective: standing up, with the video camera leveled eye-high.

While one could certainly shoot every scene with the video camera perched between 5- and 6-feet high, a dramatic change in camera height can offer a viewer unique and creative perspectives that add interest and give otherwise ordinary shots a new sense of creativity and excitement.

In order to shoot creative shots, it pays to be selective about perspective. So, don’t just plop your camera on top of your tripod. Break out of the box by shooting from creative camera positions. Here are four to try out on your next shoot.

Creative camera work is all about looking at the world from new points of view. One of the easiest ways to change perspective is to take the camera off the tripod, kneel down, crouch down or lay all the way down on the floor and shoot up at the world from the perspective of an ant. In the industry this is known as a worm’s-eye view.
It’s safe to say that not many people have looked at life from the point of view of their shoes. Shooting things from down in the dirt makes them look larger than life. Even small things like toddlers and toy trains seem big when you shoot with your camera on the carpet. Large subjects, like football players are transformed into mighty giants when you shoot them from the turf.

Raising your camera high overhead is another angle to investigate. This may mean standing on a chair, climbing up on a step ladder, scaling the bleachers, or shooting from a second floor balcony or scaffold. If you have access to money or equipment, you might use a jib or a remote controlled drone helicopter to give your camera a lift.
How ever you get there, look for ways to head for higher ground to capture a bird’s-eye view of the scenes you shoot. Shooting down at your subjects lends a feeling of omniscience. It can make even large subjects seem small. Think of how tiny those football players look from the top of the stadium. And imagine what a sweet sequence you would have if you intercut shots from the top row seats with grass-level alternates.

One of the greatest things about video cameras is that they can go places that people cannot. Though some shooters assume that the camera can only go where they can, there are many creative perspectives that can be discovered when the camera is separated from the shooter so it can be placed inside small spaces or in precarious positions.
A rolling camera can be placed inside a refrigerator to record a unique shot of a midnight snacker. Or inside a mailbox for a unique shot of a letter carrier making her delivery. Try placing the camera under the hood of a car for a compelling look up at a shadetree mechanic lifting the lid, or from the inside of a football helmet looking out through the facemask. Just be careful to not harm the camera in the process.
Once you have grasped the notion that your video camera can go places you cannot, you will find new and exciting nooks and cubbies in which to conceal your camera all around.

Slide to the Side

Regardless of camera height, in most situations we naturally tend to shoot shots that are level with the horizon. But choosing to consciously tilt your camera on a canted angle can be extremely effective in playing with perspective. While canted angles may not be overly common these days, they have been a mainstay in classic cinema and B-movie thrillers. There’s just something unsettling about a slanted horizon. Canted angles can cause your viewers to feel uncomfortable, even anxious, and that may be exactly what you need to build tension in a production.
Of course, none of these creative camera angles is sufficient on its own for an entire production. These kinds of extreme “wow” shots work best when edited into sequences with one another, and with our good old friend, the ordinary, leveled-up, eye-high shot. The ultimate takeaway is this: don’t just shoot every shot from eye level. Look for opportunities to employ creative camera positions, and be selective about perspective.
Chuck Peters is a 3-time Emmy Award winning producer.
Photo Credits:
Three young men sittingon ground modern video camers recording image from Shutterstock
Low angle view of man riding bike image from Shutterstock.
Young man in protective gear with backpack riding bicycle on sidewalk image from Shutterstock.