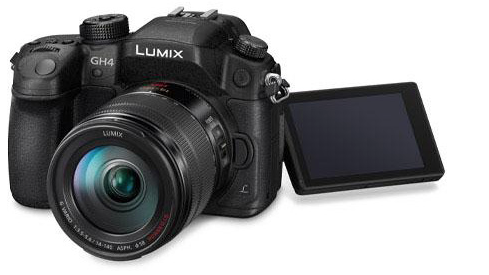 Panasonic has lost ground in the race for DSLR superiority with Canon, Sony, and Nikon. All of these make cameras with high-end photographic abilities and are capable of true HD video. Panasonic hasn't let down its guard though, and is about to announce a 4K video capable camera that is sure to turn some heads. The rumor is that tomorrow, February 7, Panasonic will announce the new Lumix GH4 micro four thirds camera.

The Lumix G4 builds upon Panasonic's strong support for the micro four thirds camera format. It features a new 16 Megapixel sensor, built to reduce noise and deliver a greater dynamic range than earlier sensors. The Lumix G4 is rumored to have a quad core processor. The biggest feature, at least the biggest feature for us videophiles, is that the Lumix G4 is able to capture 4K video at 4096×2160 at up to 96fps.

Not only will the camera be capable of 4K video but it is built to be accessorized for video production. There is an optional interface that attaches to the bottom of the camera. The interface features 2 XLR connections, 4 SDI connections, and micro HDMI output. The Lumix G4 will be able to output a 4:2:2 10/8bit signal. There is much speculation about the price of the camera, but most rumors lean towards a $3800 price point.