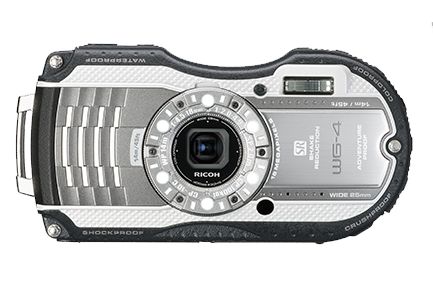 A rugged camera is what's needed to survive the brutal winter being experienced by most of North America. Videographers and photographers are a tough sort, often doing whatever they need to in order to get the right shot, but most wouldn't risk their gear in the extreme sub-zero temperatures that have covered large portions of the continent. It's the kind of winter that needs a rugged camera as tough as the polar vortex.

A camera that's tough enough to face the freezing cold, able to plunge into polar waters, and able to take a beating when dropped from iced over mittens. Ricoh Imaging, the makers of Pentax DSLRs, knows this and announced this week a couple of new adventure-ready cameras. The Ricoh WG-4 Rugged Camera and WG-4 GPS Rugged Camera fit the bill and will soon be available to share in adventure.

The Ricoh WG-4 and WG-4 GPS Rugged Cameras are compact and built to endure extreme elements while providing a high quality image. Both cameras are waterproof up to depths of 45 feet, able to withstand falls from over 6 feet high, and can tolerate temperatures as low as 14 degrees fahrenheit. They're also crush proof, able to handle 220 foot-pounds of force.

These dust-proof cameras boast a 16-megapixel CMOS sensor and a 25-100mm lens, effectively a 4x optical zoom. Each camera incorporates 6 built-in LEDs for use in macro-photography. They are capable of shooting 1080p HD at 30fps. The WG-4 GPS features built-in GPS capabilities for location tagging. The Ricoh WG-4 Rugged Camera will be priced at $329.95, while the Ricoh WG-4 GPS Rugged Camera will be priced at $379.95. Both cameras will be available later this month.