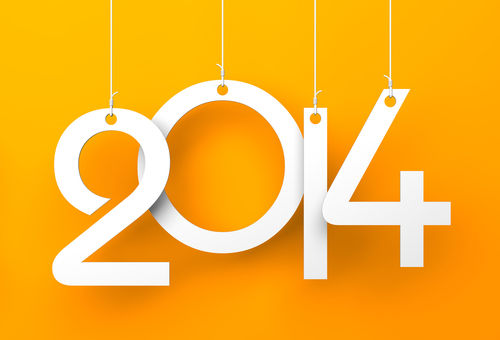 Trends come and go, there's no true formula for determining what will be the next big thing, but a video editor can take a good guess at what's popular by observing different styles and the frequency of their use in video production. Here are five trends in motion graphics that are appearing quite frequently and should be a good bet to see continued success in 2014.

Flat design is a graphic design trend that goes against the trend of the early 2000s to create photorealistic visual elements. Google has incorporated flat design in their different app logos such as those of Gmail and Google Docs. Apple has also jumped onto the flat design trend with the interface redesign of iOS7. Flat design utilizes simple geometric shapes, solid colors, and little (if any) depth to render flat looking objects.

Although, long shadows are finding their way into style, flat design translates over to motion graphics, and with good reason. Objects and visuals that fall within the flat design trend are easy to create and animate in programs such as Adobe After Effects. A benefit of flat motion graphics, is that they don't take long to render or consume the processing power of a 3D computer generated image. The simplicity of flat motion graphics makes it easy for a video editor to create them on their own without having to outsource their design needs.

Graphic designers and photographers have embraced the trend of compositing two or more images together to make surreal subjects in their art. The same thing is happening in motion graphics. Video editors are taking various video clips, shot in a cinematic style, and then compositing the images together to draw the audiences' attention. It can be tricky to do, especially when trying to match the motion between two separate subjects, but if executed successfully, composite images serve the video editor well as an illustrative visual.

The overall attention span of media consumers appears to be decreasing. People are more accepting of content that comes in smaller bites. Social media and web video are making an impact on how video is produced and viewed. As a result, there is a growing audience that likes to see videos  — motion graphics included, that are only seconds in length.

This includes an interesting off-shoot, that's not quite video and not quite graphic design. The animated GIF, a digital image format that's ancient by internet standards, has burst back onto the forefront through the micro-blogging of Tumblr and the creativity of those making animated GIFs. A good animated GIF wraps the principles of the moving image and graphic design into a small span of several frames delivered as a looping animation. It wouldn't be surprising for a client to ask a video editor to make an animated GIF out of a clip of video.

Motion graphics aren't necessarily entirely made from computer generated elements. Just as flat design bucked the trend of photorealistic renders, practical elements (real objects) are appearing and being used as design elements in motion graphics. This is similar in thought to the trend of full frame video, but instead of using the entire video clip, the subject matter is keyed or rotoscoped out and composited into the motion graphics sequence. Practical elements are frequently used in stop-motion videos. There's a unique illustrative quality to using practical elements and stop-motion to create entirely new visuals when telling a story.

White tags with 2014 on orange background image from Shutterstock