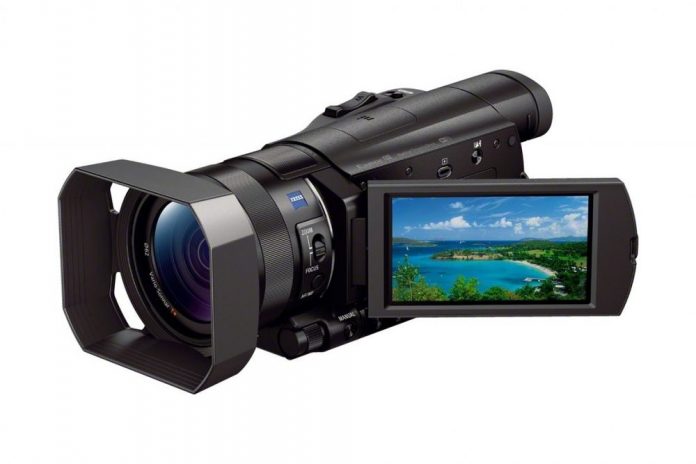 The price of the Sony FDR-AX100 is $2,000, and that is good enough for 4k video, a 7-blade aperture and dual recording of AVCHD and MP4. This is an incredibly feasible price for many videographers. The 4k video records to SDXC and at 30p in the XAVC-S format. Compare this with two other cameras, Sony's own HandyCam FDR-AX1 which is more than twice the cost, much larger and requires an XQD card workflow. The AX1 still has the pro audio capability, and the AX100's drawback is not having an XLR input. Then again, most camcorders at $2,000 are stuck at 1920x1080p. The selection of good cameras at $2,000 is intense, so here's some features that stick out about the AX100. Sony includes a Wi-Fi, NFC, silent zoom, Linear PCM 2.0 channel audio, and an internal ND filter with three stops.

Not to stop there, Sony also presents the HDR-CX900, which, for lack of a more elegant description, is like a DSC-RX10 as a camcorder. The coolest part is that it has a 1-inch ExmorR BSI CMOS sensor which is much larger than the sensor in most camcorders. Though CMOS sensors are often discounted for their weakness to moire, the direct all pixel readout seeks to reduce such aberrations. High frame rate is mentioned above in the AX100 and shows up with this one too. The CX900 also reprises the Balanced Optical SteadyShot from the HandyCam line and is a welcome image stabilization feature. So for $1,500 the CX900 can capture uncompressed video, and provide a large sensor camera.

The next big announcement is more of a small item. The HDR-AS100V action camera has new color, white, instead of the classic Sony-gray. The BIONZ ExmorR imaging system allows for 50Mb/s video. The SteadyShot feature measures the frequency bumps and counteracts them. Beyond the video capabilities, what you can do with video comes down to the PlayMemories app which allows for time-lapse and other control options. The casing makes the AS100V weatherproof and adds the tripod mount.

Lastly, and very noticeable are the improvements to the HandyCam line with updates for the PJ650, PJ430, PJ380, and PJ230 projector cameras. These respectively become the PJ810, PJ540, PJ340 and PJ275. The prices top off at $1,100 and range down to $399. The PJ prefix here indicates which HandyCam has a projector, whereas if you choose a CX model, there's none. So, say we started with the PJ810 at the top for $1,100, we'd get the substantial imaging capabilities, as well as a 50 lumen projector. How significant is the 37 lumen difference between the top and the lowest end 13 lumen projector? Exactly our first question when we saw it, the answer came when we saw them side by side. In a very non scientific answer, it is like going from 1/4 brightness to full, a very noticeable difference. Our takeaway, look at the entire HandyCam line and decide if you want built in memory, a projector, Balanced Optical SteadyShot or other features and compare away.

Check it out on the CES Show Floor