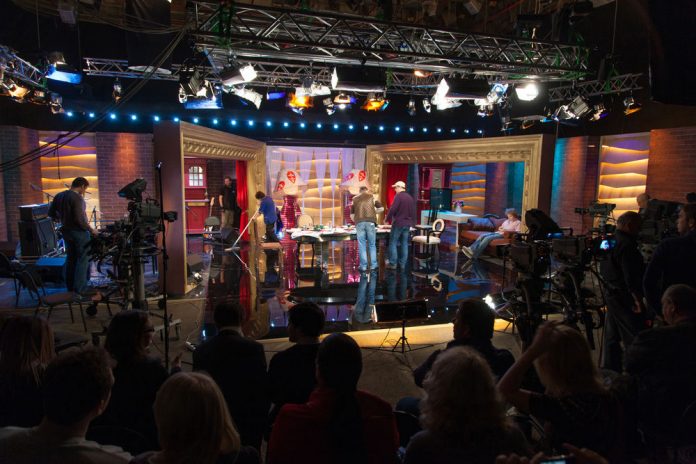 I always loved it when my favorite TV shows had behind the scenes segments where they would pull back the curtain, swing the cameras around and let you see the lights, the cameras, the crew, the mics, the edges of the set. That’s the stuff that made me fall in love with video production and making media. They showed you what you weren’t supposed to see. And you discovered that all the stuff you thought was real, really wasn’t. TV, film and video production are all about creating the illusion of a reality for the viewers.

A big part of the illusion is keeping your cameras and your crew out of your shots; concealing the fact that there was ever a video production crew present. Why? Because while viewers may logically understand that for every actor that is seen on screen there may be five or ten crew members working just outside of the frame, they wink at this fact and silently agree to voluntarily suspend their disbelief to enter into the story. But when a boom mic dips into a shot and they are reminded that what they are watching is a video production, the spell is broken and the story is compromised.

Here are three spell-breaking problems that video producers run into and some tips for how to avoid them. When you are aware of their potential, you can take proactive measures to prevent problems.

In single-camera film-style production, concealing your video camera mostly means being aware of reflective surfaces and selecting angles to get good shots without showing the shooter or the blips of a blinking tally light. Mirrors, windows, shiny candlesticks, champagne flutes and sunglasses can all reflect the shooter’s image in a way that reveals what’s meant to be concealed. Reflection violations like these are often committed by well-meaning camera operators who are simply so focused on the subject being shot that they do not see themselves in the frame. The best way to prevent reflected images of the camera is to scan the room, set or venue to identify potential reflection problems and make a mental checklist before shooting begins. Once the hazards have been identified, the shooter can take measures to avoid them.

Video camera equipment can easily get spread out around a venue, especially during a fast-paced event shoot. When this happens, a wayward piece of gear can find its way into the frame. For instance, a videographer shooting in a run-and-gun situation may break a camera off its tripod to reposition quickly for a new handheld shot. In the process, the abandoned tripod may inadvertently enter the new composition. Preventing accidents like this requires a heightened level of vigilance to shoot without showing the stuff. Light stands and shotgun microphones are two more common culprits, even in slower-paced production environments. One way to make sure there are no offending items in the frame is to use a reliable monitor. If your monitor has an overscan/underscan option, toggle it on and off to view the full frame, then re-adjust the composition before you roll.

3. Caught in the Crossfire

With multi-camera shoots, the secret is planning setups to keep the cameras out of each others’ field of view. Think of this as triangulating crossfire so everyone can shoot without getting shot. If one video camera does need to temporarily cross through the shot of another, the most forward video camera needs to do so while providing a stable and usable shot so it can be used during the final edit, or an insert shot will need to cover the crossover. Once again, the education and awareness of the camera operators is the greatest tool to combat crossfire problems. An alert and resourceful operator may be able to re-frame a shot quickly to keep a cohort’s camera out of the frame.

If gear does enter the frame, or if one video camera enters the shot of another, it does not necessarily mean that the unwanted shot will have to appear in the production. In some cases the resolution of digital video can save a shot. If a piece a of video production gear enters the edge of the frame of a shot captured at 1920×1080 or greater, for instance, the editor may be able to enlarge the shot slightly in post to conceal the error without introducing any noticeable loss in quality. One of the best ways to cover any of these three problems is to edit around the offending piece of footage. In most cases, inserting a cutaway of a close-up or cutting to an alternate angle will effectively hide the miscue from the viewer.

Event video producers often must deal with the presence of a separate still photographer who has a different agenda. Oftentimes still photographers are cooperative, but some have no trouble walking in front of the video cameras to get the shots they are after. Even then, the goal must be to present the client with a production that does not include evidence of those covering the event. To be sure, editing out shots that show a piece of equipment, a reflection of the cameraman or a pesky photographer can be a challenge, but it is worth the effort to edit them out of the final video. Some video producers might go so far as to willingly insert reflected shots of themselves as a sort of cameo. To these friends we’ll point out another important production principle: the videos you make are not about you. As makers of media, a big part of the job is to remain behind the scenes.