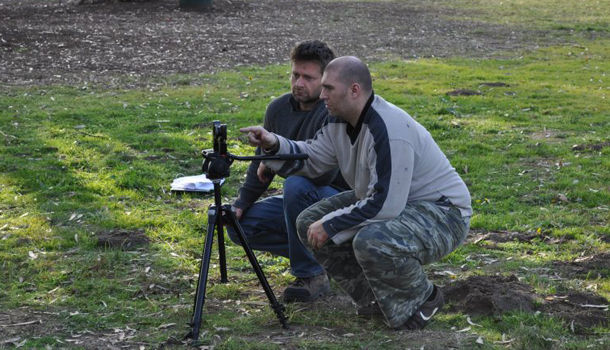 Award-winning Spanish director Conrad Mess has been at the forefront of iPhone filmmaking since his jaw-dropping debut The Fixer won a bunch of awards just over two years ago.

Completely self-taught, Mess has carved out a reputation for himself as a special-effects guru, shooting on the iPhone and editing in Adobe Premiere, After Effects and Cinema 4D to present highly stylised and visually stunning mobile shorts influenced by big-name directors such as Quentin Tarantino, Robert Rodriguez and Michael Bay.

The Fixer, shot on a budget of just $400, blew away all competition (and judges) at the second iPhone Film Festival (IFF), winning best film that year.

Miguel Johnson, an IFF judge, described the special effects on The Fixer as “awesome” and the story “attention grabbing”, the quality “so good that it was simply hard to believe it was shot on an iPhone.”

Since then Mess has gone on to produce three more iPhone shorts in a similar vein, Russian Roulette, The Asking Room and  his latest, The Other Side (see video below), which has just been released and is also causing a stir in the mobile filmmaking world.

For The Other Side, Mess chose to shoot the film on a green screen to add CGI background and additional special effects at the post production stage – a first for a smartphone film.

Mess has once again raised the bar for special effects filmed on an iPhone. The 17-minute film is based on a horror tale written by Spanish writer Marina Gómez, and was shot in black and white on an iPhone 5, mixing “Victorian aesthetics and 3D graphics in horror comic style”.

The Spanish production directed by Mess is a dark and atmospheric work a with a cast of five and a budget of $27,000 that has already picked up one award – Best Film in the 2013 Phonetastic-Sitges International Film Festival.

The shooting of The Other Side has meant a lot of hard work,” Mess tells us, “but it is a unique and innovative format that has made it worthwhile.”

Mess has no formal film training and only started “fooling around on the iPhone 4” after he bought one for his wife as a wedding anniversary present when it was released in 2010.

Before that he experimented making a film called Avenger Love on a domestic video camera, but once he got his hands on an iPhone there was no looking back as he found the smartphone more versatile and easy to use, he says.

The reaction to his debut film The Fixer was extraordinary with many refusing to believe it was made on an iPhone.

Ruben Kazantsev, co-founder of IFF, said of The Fixer: “One no longer needs a multi-million budget to make a film or a crew of actors and supporting cast that can easily fill a major venue.”

The success of Mess’s debut led to doors being opened in Hollywood to shoot his second film Russian Roulette and he is a regular guest at mobile film festivals around the world, where so far he has won 13 global awards.

“You know, when you haven’t got resources, you do what you can. I got my wife’s iPhone, some friends and the table and chairs from my garden, that’s all. Oh, and a reflector too,” he says about how he made The Fixer.

He also tells us he enjoys the editing and post production side of filmmaking best: “in fact, for me, this is the most enjoyable part of the process, the edit, also when I’m creating the script, not when I write it but when I’m imagining it,” he says.

Working with little resources, and sometimes with just one iPhone – but with huge ambition and imagination, Conrad Mess is just one example of what is capable, in filmmaking terms, these days on a smartphone  – and this director is definitely one to watch.