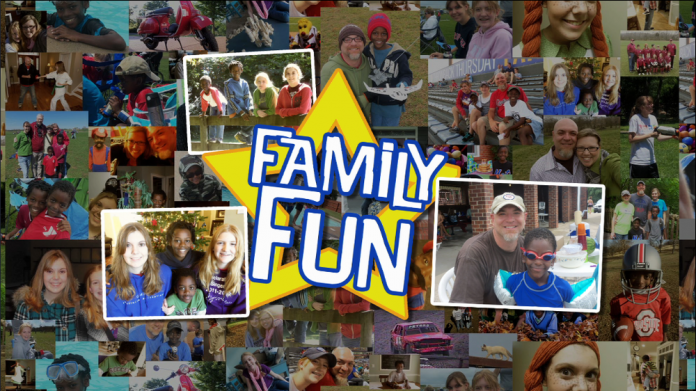 There are a lot of great royalty-free animated digital backgrounds available to editors. Some are simple textures. Others are elaborate 3D graphics loops. Some are available free, others are worth paying a few bucks to own. In many situations, these off-the-shelf digital background animations may be exactly what an edit needs. I think every editor should have a bunch of them available to use. But, sometimes a production calls for something more personal.

Whether you need a background for title graphics, or an animated digital wallpaper to play on screens at a party, creating your own photo-based animated wallpaper is an attainable option that may be easier than you think.

Not sure you can do it? Here are step-by-step instructions to help you pull it off like a pro. We’ll describe how we created our photo-based animated digital background in this story. With a photo editing application like Adobe Photoshop and your video editing software you can use these principles to make your own photo-based motion graphic.

To get started, open a photo editing application, like Adobe Photoshop, and build a photo collage. We used Photoshop for our example. Since our background was for a high definition video production, we created a new file at 1920×1080. With the project open, drag pictures from a photo folder into the Photoshop window, one at a time, then scale and position them until the full 1920×1080 palette is filled with pictures. Once the collage design is complete, export a jpeg still of the collage.

The next step is to create an extra big still that is approximately two or three times larger than the resolution of the video project. In our example, we opened a new Photoshop project window at 3000×3000. With your big big palette open, drag in the still image of the comp created in step 1, and slide it into the upper left corner of the Photoshop window. Next, duplicate the image several times on multiple layers and spread them out to fill the window. It is okay to overlap and offset them. When the window is full and you are happy with the look, export a still of the extra large 3000×3000 image.

Step 3 – Open Your Video Editing Software and Import the Image

Next, toggle over to your video editing software and start a new project. We used a 1920×1080 high definition project for this example. With the project open, import the extra large 3000×3000 still image that you created in Step 2, then drag the clip onto your timeline. Stretch the duration of the clip to the length you will need it to be in the edit. For this example, we set the duration of the clip at 15 seconds.

With the large still image on your timeline, click on the clip to select it, then open your editing application’s motion controls. Using your video editing software’s motion controls, zoom in on the big image and adjust the scale and position to show only the original 1920×1080 still image that was the first image placed in the upper left corner of the 3000×3000 image in the visible window. The remainder of the 3000×3000 still will extend beyond the visible area. With the image scaled and positioned, look back at the motion control settings interface and click to set a keyframe.

After you have determined your starting position and set a keyframe, reposition the big photo to select your ending composition. You may simply slide the image horizontally, vertically or diagonally. We chose to set our end frame in the corner diagonal to our starting position. This will cause the wallpaper to crawl at an angle. With the end position selected, move the playhead to the end of the clip and click to set a new keyframe. If you like, you can also experiment with keyframes to simultaneously animate the scale and rotation of the clip.

With the image scaled and positioned, and with start and end keyframes set, it is time to tap the spacebar to preview the animated wallpaper. If you are happy with the speed and direction of the movement, it’s time to move on to the next step. If not, make adjustments to timing and direction by adjusting your keyframes.

Since we intend to put text and graphics on top of the background, it is helpful to scale back the color. This can be done in your video editing software by lowering the opacity of the clip. This can be done on the timeline by adjusting the clip's handles, or can be entered as a numerical value in the motion control window. We lowered the opacity of our clip to about 70%.This will “gray back” the photo wallpaper so it won’t compete with top-layer graphics.

The final step is to create a title graphic to position over the animated wallpaper. For our example we returned to Photoshop, where we created our text over a star icon, and added a few more photos with white outlines to make them look like old-school snapshots. We then exported our title graphic as a .png file, to preserve the transparency of the background layer. Next, open the title in your editing application and layer it on a video track above the animated wallpaper. If you like, add keyframes to the title layer to add some “grow” and rotation. See our video example below:

The result is a cool, custom, fast and easy animated photo wallpaper title sequence. Once you get the feel for using your editing application’s motion controls to position and move things by setting keyframes, you will find that you can create all kinds of cool elements.