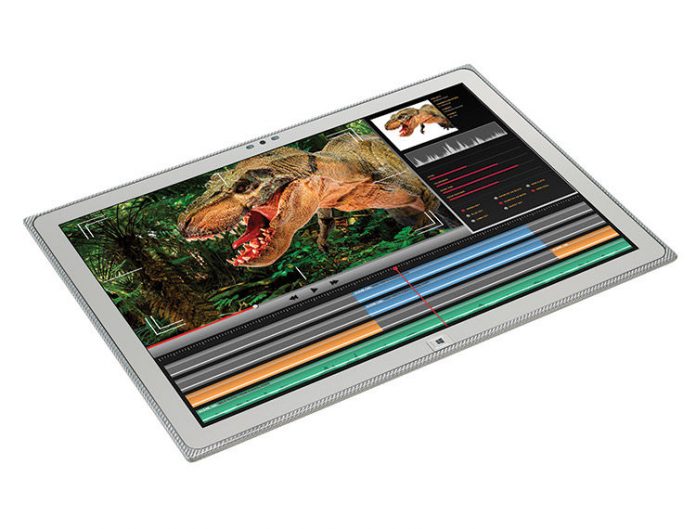 We've been watching and reading for as much Panasonic news as possible and looks like we'll really need to stay tuned (especially if Devin Graham gets a hold of Panasonic gear). We love that they've announced an action camera that shoots 4k, and are excited to see the mounting options since their cameras are unlike many designs. Panasonic's A100 shoots 1080p, and is a rectangular pack with a cord tethering a small lens module. The new 4k design puts the little lens over the ear and is likely capable of a wide assortment of mounts. Another product we'll be waiting on is the 4k waterproof Varicam. Before Panasonic's announcement the words '4k' and 'waterproof' hadn't been so closely tied.

Wowing audiences is no problem with a Toughpad 4k 20-inch tablet. Sadly, the camera built into the tablet is only 1280×720 video. Is it was too much to ask for a 4k camera to be placed inside such a tablet? Perhaps soon, Panasonic, or someone else will make a 4k display that's part of a device that can shoot 4k. There are two versions, the Toughpad 4k Standard and the Toughpad 4k Performance both have Windows 8.1 Pro, a 256GB SSD and have been tested with a bottom side drop of one foot. The magnesium alloy chassis should be a familiar feel for videographers, and welcome I/O include USB 3.0 and SD cards. The Toughpad 4k Performance adds an i7 core, upgrades the graphics to K1000M GPU, 16GB RAM, a Mini DisplayPort, Ethernet and a combination headphone/speaker jack. There are already so many ways to integrate tablets to video production, it's a little mindblowing to think of having a 4k one.

The LUMIX line gets bolstered with four cameras, the TS5, TS25, ZS40 and ZS35. The two TS point and shoot cameras have built in toughness, and are waterproof, shockproof, and freezeproof. For these cameras, the video capability may be thought of as a feature, but it can really highlight the fun of shooting. The TS5 has a Miniature Effect mode that feels like a time-lapse mode and the TS25 has a dedicated record button. The ZS40 and ZS35 cameras are big on their optical zooms at 30x and 20x respectively.

To be continued … watching Panasonic announcements that is. When we found out more about their 4k action camera and 4k waterproof Varicam, we'll share it here.