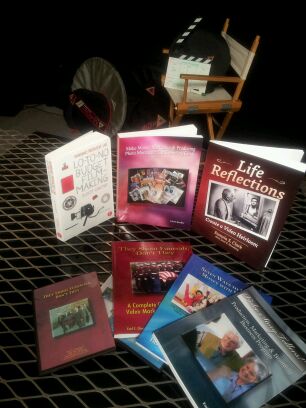 Self improvement doesn't have to begin with the first of a new year, but it’s a good time as any to start, and what better time than in the midst of winter when it’s too cold to shoot, when there’s not a lot to shoot, and when it’s time to get yourself prepped for spring shooting.

This year, try relaxing a bit more and tuning into an old-fashioned way for the video producer to gain production knowledge: through books.

We took a look at a few publications that you, the video producer, might find interesting to hone your skills, better your creative video edge and possibly go further into the filmmaking world and produce that first documentary or full-feature film you’ve always wanted.

by Mike Carroll
Carroll is a long-time TV news veteran in a competitive major TV news market and anyone who has worked news can do it all. After working the news gig for several decades as shooter, editor, reporter and other various positions, Carroll turned to longer format producing and created a documentary: Dog Soldiers, and two feature films, Year and Nightbeats. Carroll's book, Naked Filmmaking, is chock full of tips he learned for one-man-crew/small crew producers who hope to make a feature film without going into life debt to accomplish it. Your first task: writing a story that you can actually produce – not as easy as one would think.

by Elliot Grove
Grove is an admitted self-taught filmmaker learning the ropes on the job as producer, set designer and scenic artist on more than 700 commercial productions and 68 feature films. He also runs Riverdance, one of Europe’s largest independent film festivals. He clearly knows his stuff and tells his readers on the very first page of his book: get a camera then get out and shoot. Grove covers a wide variety of subjects in this second edition to his book, from working with (and avoiding) Hollywood sharks to every aspect of shooting, including gaining access and acquiring permits to budgeting and dealing with the nay-sayers and door-slammers.

Raindance Producers' Lab: Lo-To-No Budget Filmmaking is the bible for all aspiring filmmakers or video producers hoping to get their story told, their project produced and their film seen by an eager audience… all on an acceptable budget while avoiding out-of-this-world expenses or bending to the Hollywood fat-cats’ control.

by Pamela S. Clark with Janet R. Kinneberg
Pamela S. Clark’s book is the perfect read for beginner video producers who want to make memorable history videos but don’t know where to begin. From The History Channel to Ancestry.com, everyone seems to want to find their past or have a story to tell, and setting that story to video is the best way to preserve it. But how do you begin when you are at the very beginning of your video schooling? At just over 100 pages, Life Reflections: Create a Video Heirloom is written for the family historian who doesn't know a codec from a format, but still has the vision, desire and passion to tell a life's story. Clark takes the reader through the steps of how to set up plans for doing interviews and finding your subject to knowing how to use the simplest of gear – and she proves that it doesn’t have to be the best gear to still get the best results.

Her primary focus is one we all should follow: don’t wait. If you want to be the family historian, now is the best time to get behind that camera and give it a go. Using Clark’s ideas, you’ll find all the gear you’ll need is affordable and the tools are easy to use as she breaks down every step in easy-to-follow text, diagrams and charts. Making history videos shouldn’t be hard; Life Reflections: Create a Video Heirloom is a must-read for anyone wanting to keep their family history alive through video but doesn’t know where to begin.

Prolific writer Earl Chessher’s collection covers a wide range of tips and tricks to making money making video, from the emerging funeral video business to video montages for profit. Each book is chock full of good advice for anyone interested in earning income on the side, or going full-time into a video production business, and several of his books come with bonus DVD samples of real-world videos he’s made for profit.

Chessher’s first book came about as an un-tapped market for video business. Memorial videos are now a common event at funerals, but some families also wish to record the funeral itself, for friends and family unable to attend, or just to have as a keepsake. They Shoot Funerals, Don’t They  touches on all the aspects of planning and setting the guidelines at each ceremony, to tips on specialized funeral videos like military, legal aspects and how to work on extremely tight timelines.

Make Money Marketing & Producing Photo Montages doesn’t stop at how to use clients’ still photos and turn these into moving video through pan-and-scan techniques. He also teaches readers the art of the technique creating images that flow fluidly from scene to scene. Chessher walks the reader through the steps of getting the best image possible from the scans, editing the montages to music, and most importantly, how to market yourself and make money through this venue.

Seven Ways to Make Money with Video highlight specific video business ventures from stock footage and youth sports to holidays and special interest videos. As always, since Chessher is a businessman first, each type of video profile offers insight to how you would promote the type of video, how you would price it and what gear and skills you need for each.

Video StoryTellers is Chessher’s personal brand, and his same-named book is an accessory to his franchise that you can purchase that teaches you how to create your own brand for marketing, business planning and franchising. His business model is quite thorough, and his tips are top-notch.

Our book takes you from A to Z and everything in between including updated information on sensors and formats to the creative techniques to make your images better. The Videomaker Guide to Video Production covers the gear you'll need, then moves into Pre-production (planning), Production (shooting), Post-production (editing) and finally, distribution, which covers marketing your videos to getting those videos seen via disc, streaming, Web sales and more.

Making money in the video production business is a large and varied field. Nearly everyone who has picked up a camera, at one time or another has pondered on how to make money using it. Photography and video production are very expensive hobbies. If we can profit a bit from it, then we have the means to upgrading our gear when we need to without tapping into our reserves!

Farmers take advantage of the short winter days and dormant fields to clean, repair, sharpen and prep their tools for the spring plantings to come. The wintertime is a good time for the video producer to prep for the spring by learning new techniques, honing their skills, and finding new ways to look at video production. Time to snuggle in and read a book! Happy winter!