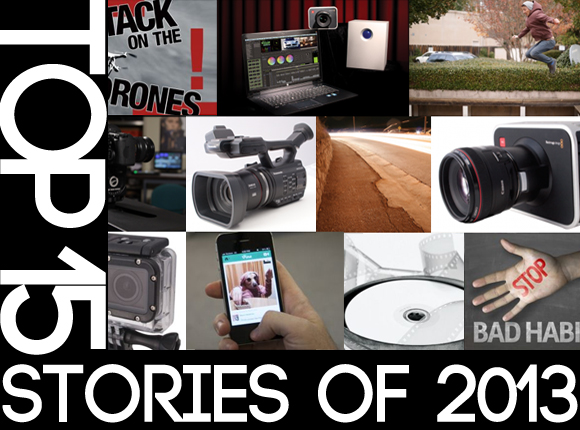 2013 was a good year for Videomaker and the video industry in general. The world continues to change and technology is moving forward at blazing speeds. What does that mean for the video enthusiast and video professional? It means 2013 has seen a lot of video innovations, so much so, that it's easy to forget all that's happened in one year's time. Here's a look back at the 15 most read stories from Videomaker.

One thing that stands out at Videomaker are the articles that feature tips, trick, and techniques to help make better video. Sometimes, making better video doesn't cost as much as one would think.

Equipment and video camera reviews are always a popular topic at Videomaker and 2013 was no let down. This year, it seemed like new cameras were released every week. Canon's XA20 and XA25 were of particular interest.

Cameras aren't the only gadget of interest to video producers. 2013 saw lots of innovative gear, equipment that helps to raise the bar in creating professional quality video.

Video is a series of still images. So incorporating a still photography DSLR camera for time lapse shots makes a lot of sense. It's not that difficult, once you know the tricks. This story helped you find them.

11. How to Make an Effective Demo Reel

The best way for a video professional to showcase their work is with a comprehensive and good looking demo reel. Videomaker shows you how it's done.

10. Is Shooting with a Drone Camera Legal?

One of the big video highlights of 2013 is the number of miniaturized cameras. Not necessarily because of the cameras themselves, but what can be done with them. Aerial videography is now in the mainstream, but what are the legalities to it?

9. One Man Crew in Action

Videos of video gear in action are popular here at Videomaker. This video of Redrock Micro's One Man Crew proved to be one that enticed and entertained our audience.

Video editing is a part of the production pipeline that can't be ignored, which means it's a good to know the options that are out there for video editing software. The technology changes at the speed of light, so it's always good to stay tuned in.

Did we mention video camera reviews? They are the most popular features here at Videomaker, and the review of the Panasonic AG-AC90 was very well received.

Different situations and set-ups require different gear. This comparison between Thunderbolt and USB 3.0 connections answered some questions that were out there.

Slow motion is much more common with today's cameras that offer variable frame rates. Unfortunately video producers sometimes has to work with the footage they're given. This video proved popular in showing some of the options out there to fake slow motion in the edit bay.

One of the most popular new cameras on the market is the Blackmagic Cinema Camera. Its 13-stops of dynamic range, affordable price point,  and ability to output uncompressed footage make it a revolutionary option for the digital filmmaker.

What good is a video if there's not an audience to share it with? Vine is a social media platform for sharing quick six-second videos. This popular article explains how to make the most of that time.

1. Top 10 Video Editing Habits to Give Up

Happy New Year! We hope you have a productive, healthy and fun-filled year making great videos in 2014.

Render of top 15, isolated on white image provided by Shutterstock.