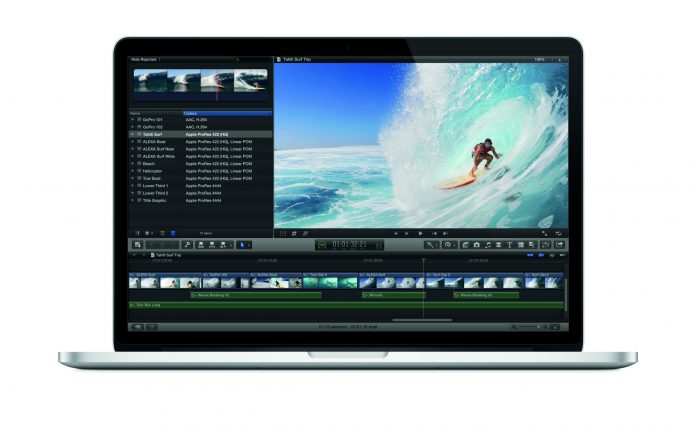 It's not really a surprise and it's an update that's been long anticipated by the Apple user base of the video community. Apple released an update for Final Cut Pro X (FCPX) to coincide with the release of the all-new Mac Pro. The Mac Pro is built for professional video editing, its dual graphic processors allow for multiple streams of full 4K video. FCPX was updated to take advantage of the technologies in the Mac Pro, as well as deliver some desired and requested features which have been missing since FCPX's arrival.

FCPX is a polarizing video editing application, some people love it, others loathe it. Whichever side of the fence one stands on, there is no denying that it is unlike any professional video editing app on the market. The newest upgrade, available today for free to owners, adds some new capabilities and optimizes FCPX to work with the all-new Mac Pro. The biggest of these changes is its performance when working with 4K footage. Installed on the Mac Pro, FCPX can handle up to 16 simultaneous streams of 4K multicam in ProRes. Not only does Final Cut work with 4K ProRes, but it is also able to work with native 4K files in Sony XAVC and in REDCODE RAW. The architecture of the Mac Pro when paired with FCPX allows for up to four secondary color corrections in real time. Of course this would be a moot point if it was all viewed at a lower resolution but the update to Final Cut supports external monitoring at resolutions up to 4K.

One of the biggest knocks against Final Cut Pro X on its release was its media management. It did not have a media workflow that matched up to established practices of previous Final Cut releases. New to Final Cut Pro X 10.1 is Libraries. Libraries are a new way for organizing work in FCPX. They allow multiple projects and events to be stored in the same location while optimizing project workflow and sharing capabilities. This is a feature that many users and previous Final Cut enthusiasts requested. The upgrade to Final Cut Pro X 10.1 is free to existing owners and costs $299.99 for a new license.