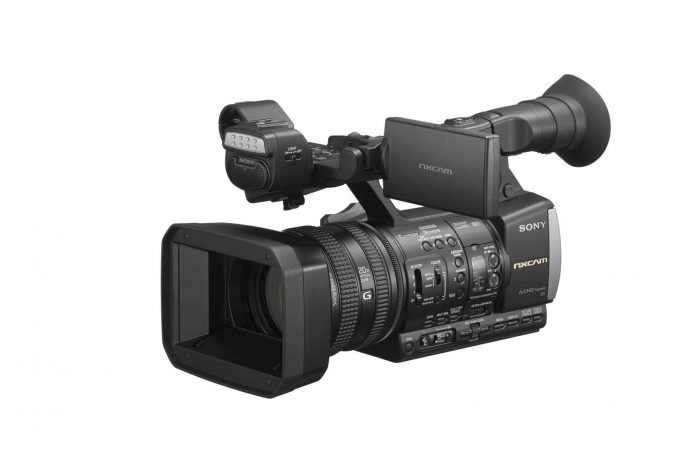 The HXR-NX3 is the newest rollout in Sony's lineup of professional video cameras. The Sony HXR-NX3 is a handheld HD camcorder featuring WiFi capability and MP4 recording. The way Sony implements these two features into the camera are what makes it unique. The Sony HXR-NX3 is able to connect with mobile devices, on both iOS and Android platforms, to remotely control the camera and to transfer files. The camera is equipped with a Near-Field Communication (NFC) chip to easily pair it with NFC enabled mobile devices. Through the WiFi remote operation, camera operators can monitor video on a mobile device, record start/stop, zoom, control the iris, and Auto Focus through the touch screen.

The camera records in full HD in the AVCHD format utilizing Sony's Exmor CMOS sensor system. What's unique is that the camera is able to simultaneously record MP4 files at 720p. The dual recording is made possible through dual memory card slots, each with their own record function, meaning one can be set on and off to record while the other records continuously, or separately, contingent on the operator's choice. The dual media card slots can also be set to record as an overflow, when one card fills up, the other starts record.

The HXR-NX3 features an HDMI port, allowing for uncompressed 8-bit 4:2:2 video output while shooting. The camera's WiFi capabilities, paired with its MP4 recording, allow the user to upload and share video right from the camcorder. This is a useful feature for production crews working on location and in remote areas. The Sony HXR-NX3  should be available in January at a price of $3495.
Chris "Ace" Gates is a four time Emmy Award-winning freelance writer and video producer.