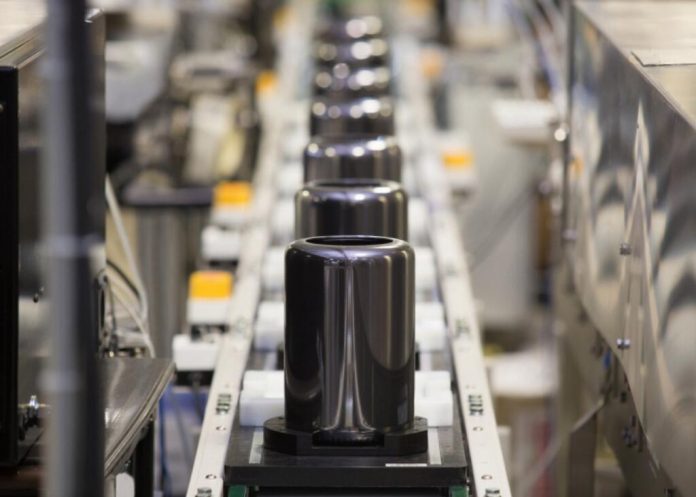 Earlier today, Apple announced its all-new Mac Pro will be available for order starting tomorrow, Thursday, December 19. The new Mac Pro is a complete makeover from previous designs. One thing this redesign points to is that the Mac Pro is built for high-end processing, addressing the demanding needs of video post-production workflows.

The Mac Pro features a much smaller form factor in a cylindrical aluminum body surrounding a unified thermal core, cooled through a single fan. The internal workings pack a lot of muscle into the processor and dual GPUs. It features the latest Intel Xeon E5 processor, with options ranging from 4 to 12 cores, making it up to twice as fast as the previous generation of Mac Pros.

The new Apple Mac Pro uses ECC DDR3 memory, expandable to 64GB and delivering up to 60GB/s bandwidth. A significant feature of the Mac Pro for video professionals is the two AMD FirePro, workstation grade, CPUs. They offer up to 12GB of GDDR5 VRAM, enough power to simultaneously run three 4K displays. This should delight video editors as it makes the Mac Pro capable of editing full 4K in realtime while rendering effects in the background.

To insure speed throughout the Mac Pro's architecture, internal storage is on PCIe-based flash storage, which is up to 2.4 times faster than SATA-based solid state drives and up to 10 times faster than a 7200 rpm SATA hard drive. The Mac Pro is built for connectivity as expansion for the computer needs to be accomplished through external devices due to the compact form factor. Connectivity is optimized through the use of four USB 3 ports, six Thunderbolt 2 ports, dual gigabit ethernet ports, and an HDMI 1.4 connection port. Wireless connectivity is accomplished through 802.11ac Wi-Fi and Bluetooth 4.0.

The default entry level price for the all-new Mac Pro is $2999 for a quad-core processor, 12GB of memory, 256GB of internal storage, and Dual AMD FirePro D300 graphics processors.