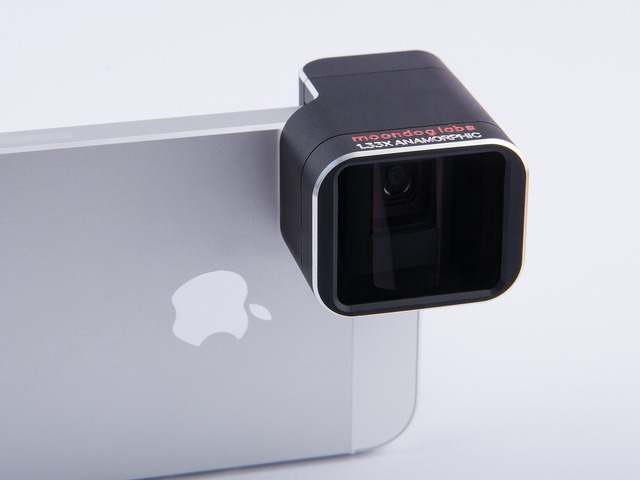 A Kickstarter campaign to raise $30,000 to produce 1.33x anamorphic adapter lenses for the iPhone 5/5S has exceeded all expectations with over $35,000 pledged so far.

Anamorphic lenses were introduced for filmmakers in the 1950s to create widescreen angles and depth with a more panoramic and visual experience for moviegoers.

Like most visual effects, they come and go out of fashion, but this old-school style of filming has been in vogue for a while now with cinematographers – although only those with serious budgets have been able to afford the lenses due to the complexity and expense of the optics involved.

So how about a device that snaps right onto your smartphone for roughly $125? (final price to be confirmed).

Adapter for the iPhone 5/5s from Moondog Labs

The developers, Moondog Labs, look as though they are onto a winner by producing an affordable 1.33x anamorphic adapter specifically for the iPhone 5/5S.

By attaching the adapter to your camera lens the image optically “squeezes” a 33%  wider field view than the standard iPhone 16:9 widescreen onto the sensor.

If it sounds too good to be true then it’s worth noting that Moondog Labs are Scott Cahall and Julie Gerstenberger, who are both are highly regarded lens designers and optical engineers who have worked at companies such as Corning Precision Lens, Kodak, and Jenoptik in the past.

Speaking exclusively to Videomaker, Cahall says that the vast majority of new anamorphic lenses are “primes”, and generally cost thousands to tens of thousands of dollars.

“There is also a limited supply of used anamorphic lenses (primes and adapters) on the market.  Some of these have great character, but are often in relatively poor condition and typically run to thousands of dollars as well.  That’s just not something most filmmakers can afford,” he says.

In relation to digital cameras, Cahall says it is feasible to make an anamorphic adapter for these devices, but again it is very expensive due the cost of glass at that scale and the fabrication processes.

Gerstenberger says that they founded Moondog Labs to develop lenses “for creative filmmakers and photographers that are looking for new storytelling tools with an artistic flair”.

She says that with their $30,000 target almost met they look to start ordering parts before Thanksgiving with the first adapters rolling off the production line early 2014.

“Filming on a mobile phone is a lot about what the form factor of the device enables – it is always with you and can fit into tight places for unique perspectives. That form factor is what has allowed us to design this affordable adapter so filmmakers can now shoot in native 2.4:1 anamorphic format on the iPhone,” says Gerstenberger.

The adapter is already being recognized as a potential game-changer in the industry and it will be interesting to see the impact the accessory has on the smart movie-making community.

To to find out more or to make a funding pledge visit the Kickstarter page, or check out the moondoglabs.com website and/or follow them on Twitter: @moondoglabs.