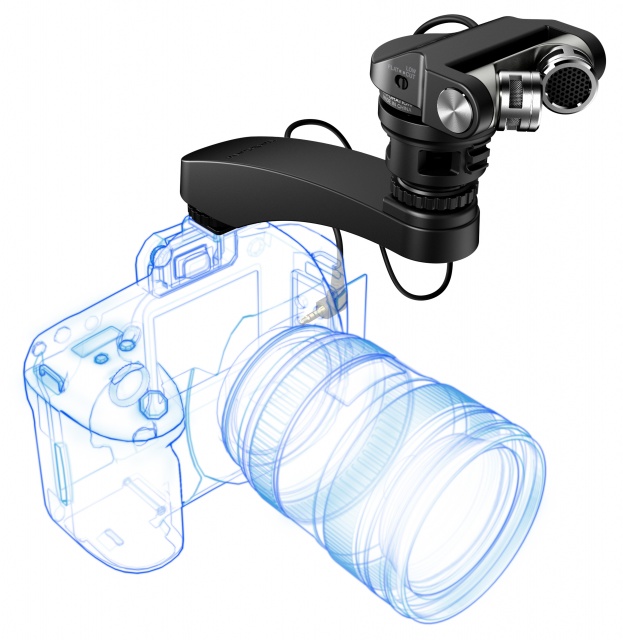 DSLR audio often gets overlooked in conversations about today's camera technology. It's not surprising, the on-board audio options for most DSLR cameras is lacking. The microphones built into DLSR cameras aren't going to cut it for professional recording purposes.

There are several options on the market for shotgun mics that plug into a DSLR's mini-audio jack while resting on the camera's hot shoe. That's a workable solution for a lot of videographers, but there are instances in which the videographer needs something like a condenser microphone on the camera. Tascam is now manufacturing a condenser microphone that plugs right into the camera, providing an on-board solution for DSLR audio.

The Tascam TM-2X has two high-performance directional microphones arranged in an X-Y stereo pattern. It utilizes the same condenser microphone used in Tascam's popular portable audio recorders. The performance range is from 50 Hz to 20 kHz, providing a true natural range of sound.

One of the more difficult tasks in recording DSLR audio from the camera is the fact that there is often handling noise and camera noise that gets picked up by the microphone. The Tascam TM-2X sits on a floating support structure to reduce any handling noise. It is attached to the camera through a noise isolation arm that extends the microphone out past the lens, which is often the culprit of camera noise for DSLR audio.

The TM-2X weighs in at 75 grams, which is helpful for keeping the camera balanced. At a suggested retail price of $129.99, it's a nice option for DSLR shooters who are a one-man band, on the go, without the luxury of an audio person riding shotgun.