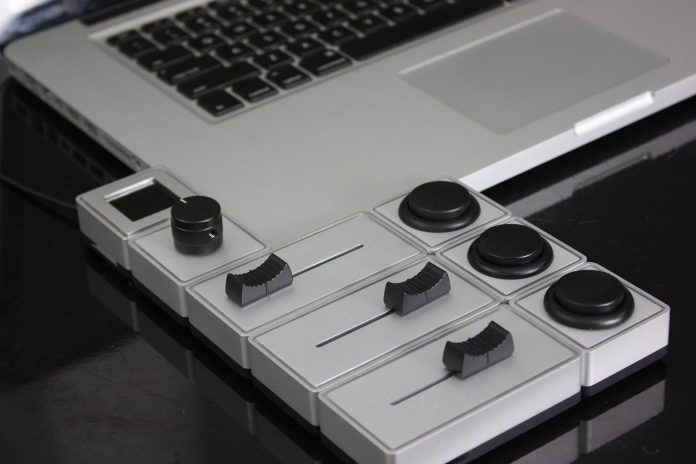 Video editing used to take place in a control room that was dominated by a tactile interface. Everything was laid out to increase efficiency and make tedious tasks easy to perform.

As video editing moved onto the computer, the interface controller changed, most of the buttons and knobs became virtual. There's not much difference between a slider and a dial when it's dependent on the click and drag of a mouse. There are still hardware interface control surfaces out there, they're just not as abundant as they used to be. Usually a controller is made for a specific task or by a manufacturer to coincide with a particular piece of software.

This type of interface is useful if you're using the software it's made to go with. Otherwise a controller can be an expensive and possibly cumbersome tool if it's not what the editor needs.

The people at Palette want to change that and have come up with a freeform interface controller that's affordable and versatile.

Launching today on Kickstarter is Palette, a freeform modular (think LEGO) controller that works with any software. It utilizes different modules that plug into each other, and can be rearranged to the user's liking, to form a tactile control surface for different software packages. It interacts with the Palette Desktop App which maps software tools and controls onto the user's customized modules.

An audio engineer could connect a series of dials and sliders together to make an audio control surface.  A video editor could set up a series of Palette modules to control color grading effects in Adobe Premiere and map another set of tools from Adobe After Effects to control a different set of effects.

Palette is looking to support the Adobe Creative SUite right out of the box so users won't be required to start from ground zero when setting up their interface.  The initial prices on Kickstarter are incredibly affordable when compared to other interface control surfaces on the market. The modular aspect of Palette favors the potential for future expandability and adaptable controls.