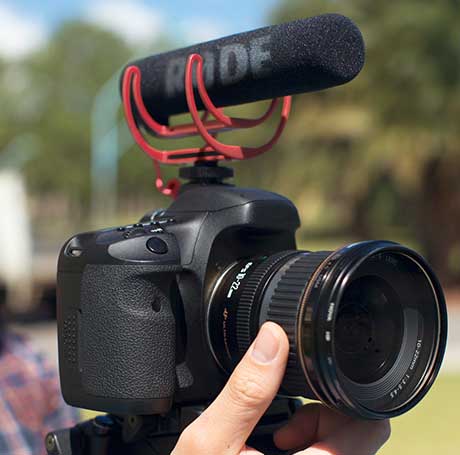 The RØDE VideoMic GO is shotgun microphone built for DSLR audio. The VideoMic GO locks into a DSLR camera's hot shoe and requires no batteries, running off of the camera's 3.5mm audio jack. One of the more difficult aspects of recording clean DSLR audio involves camera handling and mic placement, which is why a shotgun microphone is good for on-camera recording with DSLRs. The RØDE VideoMic GO reduces camera handling noise by utilizing a Rycote Lyre shock mount to suspend and isolate the mic. The frequency range for the VideoMic GO is from 100Hz to 16kHz which doesn't quite measure up to the frequencies of a professional shotgun mic, such as the NTG2 but it is an improvement on what most hand-held DSLRs and 'point and shoot' cameras have for internal microphones. The VideoMic GO weighs only 73 grams, helping to keep the camera balanced and making it easy for hand-held shooting. The suggested retail price of $99 makes it an affordable option for the consumer who is looking to pick up improved DSLR audio, without breaking the bank.