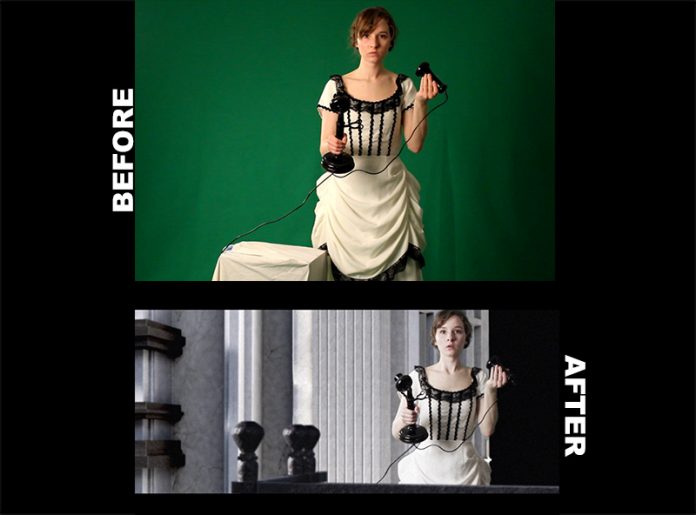 Shooting on green screen can be very tricky. So much so, that often the viewer can easily tell that the footage they're watching was shot on a green screen. It can take many years until one perfects this art form, but these 5 tips might save you some time and some of the trouble.

So you have an actor and a green screen and a camera. For some reason, one’s natural instinct is to set up the shot with the actor facing directly towards the camera and the green screen directly behind. This gives a very flat extremely fake look. Every part of the filmmaking process matters, both on green screen and off green screen. In a shoot that is on location, an artist would storyboard or block out the camera positions and get the best angles to tell the story. That is also true with green screen shoots.

Take the time to storyboard your shot, as if a green screen was not even there. Choose the best angle during your storyboard or previsualization (previs), a rough animation of what the scene is going to look like before it’s shot. Don’t be afraid to do a low angle or a high angle. Choose the camera that best tells the story, just as you would any other shoot. Try to stay away from the talent directly facing the camera unless that is the best way to tell the story. If it’s not, let’s leave that for the TV weatherperson.

Where is the motivating light coming from? Is it behind the character, in front of the character, above, below? Plan all of this out and light accordingly. If there’s police lights in the scene, well then that is going to make a big difference. Is it a scary scene? Well, let’s push the ratio. Make sure you’re lighting for the final result.

There is no rule that states the entire CG environment must be artificial. Only green screen what you have to green screen. Use as many practical elements as you can. Give you actor things to play with and interact with. The more real objects you have in front of you, the less you have to fake and make look real later.

For one of the shoots we did, I drew the storyboards showing the character writing at a desk, silhouetted by the window. Except the location we had didn't have a window, so we put up a green screen on half the wall. I didn't have to recreate the entire wall, just keyed out the green screen section and created a window. Props also help because the character does not have to just stand there in an empty environment. Again, this is true both on and off of green screen.

If you haven’t been able to tell by now, we are trying to avoid the standing flat, facing the camera green screen shot. To do that, we must give our actor something to do. Again, this is only if it helps the story. There may be times where the actor shouldn’t move, but a lot of times, the actor should move but feel restricted because they are standing in front of a green screen and was not given blocking directions.

When shooting green screen, you want to be super prepared. Know how to key properly. Know your camera angles. Storyboard them or previs them so that everyone on crew knows what you’re going for. Let the cinematographer know where the light source is coming from in each shot. Plan these scenarios. If everything is planned, you can shoot all the angles with the light source at position A consecutively. Then you can shoot all of position B and so on. But if you don’t plan, you may find yourself going back and forth for no reason.

Plan what the background is going to be before you even shoot. If possible, render these backgrounds out, or even a rough draft will help. Show this to the actors so they know where they are. Plan where their eyelines are going to be. Plan everything. And keep thorough notes on each shot. You can never be too prepared when shooting on a green screen.

Shooting green screen is supposed to be an advantage. When done correctly, you can create really powerful images. Just know it is used to help advance the story, just like any other tool in filmmaking. With these 5 steps, choosing the right camera angles, appropriate lighting, using props and sets, using motivated blocking, and careful planning; you can dramatically advance the story you are telling with the use of a green screen. Go for it!

JR Strickland is an award winning director, filmmaker, and musician. He specializes in strong narrative storytelling.